'Mission Drift' review or 'We ran out of West!' 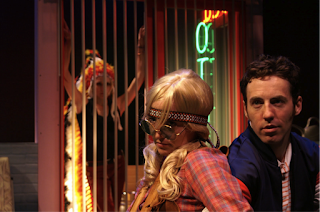 This show is also about anger. A passionate outrage fuels 'Mission Drift', tingling in the toes and reaching right up to the rafters. During the fiercest songs, it feels like one is sitting in the midst of a raging fire. It is scorching stuff.

We start at the beginning and on the East coast: two Dutch immigrants arrive in Manhattan and resolve to make their millions. We will stick with this couple for centuries, as Catalina (Libby King) and husband Joris (Brian Hastert) surge West and gradually develop a solitary shack into a 'string of resorts you can see from space.' They are heading towards their future and their demise. The end point is Las Vegas, the present, the economic crash, recently fired waitress Joan (Amber Gray) and her cowboy boyfriend Chris (Ian Lassiter). Joan marks the end of immigrants' journey and the end of the line for American expansion.

It is so useful to see America's history boiled down to this simple journey with a tangible end point. It renders the complex bleedingly obvious. Of course America was going to hit a dead end – it's written down in the map of the world! America's arrested development was never a question of if – only when.

Perhaps that's why there's a jagged irony running through this piece, spearheaded by sultry narrator Miss Atomic (Heather Christian – a mirage of seduction). The songs, with their brilliantly sparse lyrics, are underscored with a relentless and manic pulse. Even the early numbers, pumped up with promise of prosperity, are laced with regret. The words might be hopeful but the beat beneath them is fierce and ominous: 'Fight it foot forward forward forward'.

The sound and lighting has also been calibrated with brilliant precision. The gentle boom of a man chopping wood permeates the show. At first, this confident beat sounds positive, even comforting. It is the sound of development and growth and moving forward. But later – and I don't know if this is because the actual sound changed or the production made the sound feel different – this dull chopping becomes dangerous. It doesn't sound like the start of something any more. It sounds like the beginning of the end.