'Race' review or 'I need to catch my breath' 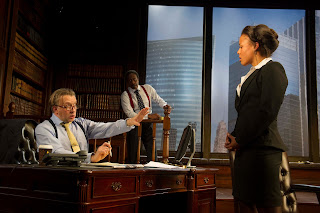 Hit something for long enough and it will eventually break. In his 2009 play, 'Race', Mamet - with his customary battering ram of words - bashes away at the gentle veneer of racial harmony and smashes it to smithereens. The characters' prejudices and doubts are left exposed and the audience is left shattered.

The setting is a huge mahogany cave of an office, designed with bold grandeur by Tim Shortall. This boastful space is home to two law-firm partners, Jack Lawson and Henry Brown. One of these partners is white (Jasper Britton) and the other is black (Clarke Peters). Outside shimmers the New York skyline, cold and bleached. It feels like we're watching a film, frozen in time. Everything is a bit too shiny to be considered authentic.

That surreal shine permeates 'Race' - in the tidy plot, sharply angled characters and ice-pick edgy dialogue. But the dialogue is so fierce and the emotions generated so intense that these exposed machinations do no matter. This is a top notch New York law firm, after all. If you can't get a bit of grand-standing theatrics in this place, then you might as well head to the blooming theatre.

Into this legal theatre walks Charles Strickland (Charles Daish), a rich white man accused of raping a black chambermaid. And who should he encounter first when he enters the law firm? Black intern Susan (Nina Toussaint-White), who just so happened to write her thesis on the persistent framework of racism that still props up New York today.
Ugly fault-lines begin to appear in Jack and Henry's pristine office. Susan's nose for injustice sniffs out one hell of a stink, when she discovers she has been subjected to an unusually thorough background check. But is Susan finding tension or creating it - and whose side is she really on? How can one work on an even playing field when the terrain is still so rough?

Carefully hidden emotions are released in accidental explosions, timed with patient precision by director Terry Johnson. Jasper Britton mesmerises as adrenalin junky lawyer, Jack Lawson. He is a heart-attack waiting to happen and the ease at which he accesses rage - especially when directed towards black intern Susan - is frightening.

Clarke Peters fascinates as black partner, Henry Brown, who - despite climbing to the top - works for his white partner and not with him. His measured self possession is far more shocking than Mamet's torrential swear words and scalding hate. This is a man who cannot be undone – a man who has learnt to accept the unspoken or subconscious prejudices that swirl about him. This is a man who has found a way to work with prejudice and hate, not against it. He represents progress but it is a progress that is eating away at his soul. He has beaten the system - but only by keeping his real self locked deep beneath his skin.