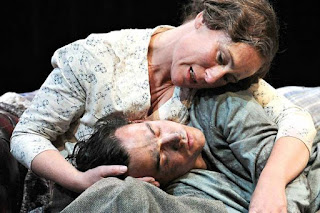 Ghosts linger everywhere in Alexi Kaye Campbell's icy new play, 'Bracken Moor'. It is 1930 and the spectres of soldiers past mingle with families in ruins, destroyed by the UK's greatest financial crisis. Over all this looms the threat of World War II and the legions of boy soldiers that will fall in its wake.

One ghost rises above them all – that of Edgar Pritchard, who died when he fell down a shaft in the Yorkshire Hills. His death has made a phantom of his mother, Elizabeth (Helen Shlesinger), who has cut herself off from the world. Edgar's death has also made a machine of his father (Daniel Flyn), who has slowly fossilised behind his stiff resolve.

The play opens with the Pritchards on the verge of turning a corner. They are admitting guests for the first time in ten years. Terence Avery (Joseph Timms) – once Edgar's best friend – has come to stay. He has also brought his parents: the gutturally cheerful Vanessa Avery (Sarah Woodward) and the laughably oblivious Geoffrey Avery (Simon Shepherd).

Director Polly Teale keeps the tension simmering nicely in the first act. The stage rattles and flickers but the spirits stay beneath the boards. The acting is brilliantly textured and the slippery emotions keep us on our toes. Helen Shlesinger, as haunted mother Elizabeth, jitters between desperation and defiance. Sarah Woodward's Vanessa initially seems a touch shallow but her delivery is thick with empathy and regret.

A compelling power struggle develops between the two mothers, as Terence is subsumed by his best friend's spirit. Shlesinger and Woodward resemble two fierce lions, lashing out at each other and protecting their cub at all costs.

But the play begins to unravel as the ghosts and themes reveal themselves. Alexi Kaye Campbell is a sophisticated writer but he has slightly overwritten and outrun himself. Ideas of female subjugation, the rise of the machine and the dehumanising impact of war all jostle for position. It is too much to handle and the thrills and characters get lost in the din.