'The Effect' review or 'I've built a bit of my brain around you.' 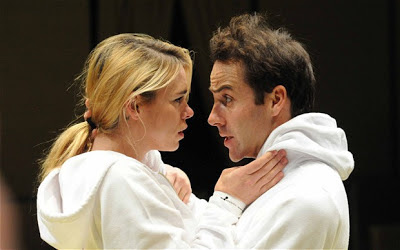 It takes a lot to make a theatre critic blub. Not because we're hard souls but because we have seen so much – and spend so much time hovering above a play – that it's hard to get swept away. But Lucy Prebble's play, 'The Effect', broke me. It is a gorgeous, thoughtful, timely, transcendent, smart and deeply moving play. It is, above all, incredibly generous and warm. Prebble doesn't bash us with her ideas but instead gently strokes us, until we are whimpering with sympathetic understanding.

The setting is clinical yet the play is anything but. The characters are so believable (and so close to us on a cleverly re-configured Cottesloe stage) that you long to reach out and touch them. Two volunteers are to take part in a Pharmaceutical trial of a new anti-depressant drug. One of the unnamed volunteers – played by Billie Piper – is a psychology student, all too aware of the connection between chemicals and emotions. The other other triallist (Jonjo O'Neill) is an old hand at this game, cynical about the process but happy to use the cash to fund his many gap years.

The anti-depressant takes a strong hold on our two triallists and, soon, they're falling madly in love. At first we're allowed to simply enjoy the process, much like the patients. A worrying and complex question rumbles underneath their courtship (is this a chemically induced romance?) but it is released gradually, slowly layering the play with meaning and turning it a darker shade of red.

Director Rupert Goold allows us to relish this early romance. He has done a fine job of massaging this play, never stamping his mark on the production but gracefully highlighting Prebble's elegant shifts in tone. Despite the question marks that hang over the triallists' affair, it is utterly believable. We fall for them, falling for each other.

There's a glorious and typically pertinent scene, when the two escape to a nearby loony asylum. It's no coincidence that it is here – in this abandoned mad house – that the two patients fall in love. As every good writer will tell us, the line between love and insanity is an absurdly fine one.

Prebble has written these parts with her actors in mind and it allows for such honest performances. None of the actors seem to be acting. Holed up in the mad house, Jonjo O'Neill tap dances for Billie Piper. The whole audience seems to swell with this scene, their beautifully choreographed courtship dancing through all of us.

Later, the two finally sleep together. Only, their first kiss is postponed – and instead we see a montage of a wide-eyed, all night chat. We watch the two bare their souls to each other, before they succumb to physical, chemical attraction. Personal and intellectual contact is prioritised over blind lust. Every scene pulses with a larger question: just what does this sequence of events tell us about the nature of love?

The two doctors, played by Anastasia Hille and Tom Goodman-Hill, are equally compelling and their muddled relationship, equally provocative. With such a strong set of characters, Prebble affords herself great structural freedom. The characters are so textured and the themes so deeply embedded into the writing that she can extend her scenes at will, confident she will not come up short.

The relationship between the two doctors is examined much more closely in the second half. It becomes obvious that their private lives are deeply affecting their analysis of the test results. The female doctor is prone to manic depression, something she believes is an innate part of her rather than chemical imbalance. Her belief nudges her towards consistently attributing more power to human emotion than pharmaceuticals. When the two triallists fall for each other, she is convinced it is a natural phenomenon. Goodman-Hill's doctor – somewhat of a celebrity on the pharmaceutical tour – is insistent that the drugs alone are simply creating the 'impression of love'.

But then Prebble digs deeper still. We learn that Goodman-Hill's doctor left Hille's doctor, when her depression took too strong a grip. He has to believe in the chemicals because he has to believe she can be cured. And yet, is love still love when you want to change a fundamental part of your beloved?

The questions keep building, swirling around but never bombarding us. There is a surprisingly beautiful scene, when the male doctor – who one thought fairly cold – defines his version of love. Family is just biology. Lust is just chemicals. But true love comes from the brain: 'I've built a bit of my brain around you.' Just as love seems to open up the brain, depression shuts it down. Do manic depressives have a responsibility to those they love to 'cure' their brain; to take the chemicals that might shut down part of themselves – but will also switch the brain back on and allow them to love once more?