'Lot and His God' review or 'Which way I fly is hell.' 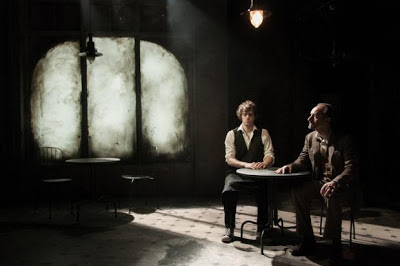 There's a particularly brutal passage in the Book of Genesis, in which God vows to burn Sodom to the ground, along with all its citizens. Only Lot is spared and God sends an angel to urge Lot to flee. In Howard Barker's 2006 play, 'Lot and His God', Lot's wife is mightily reluctant to relocate. Where on earth will she buy her shoes? And so the scene is set for a world turned inside out; a world in which God seems less than forgiving and possibly an arsonist, where a wife holds absolute power, an angel falls prey to lust and pity brings about pain.

The setting is a grimy cafe, the natural dankness of The Print Room accentuated with studied relish. A curved window is caked in dirt and the light outside, almost completely blocked out. An angel, Drogheda, enters and spits out his disgust at Sodom; a city split only between sinners and those who happily allow such sinful acts. Drogheda (Justin Avoth) is no winged angel. Instead, he looks like a tramp and sounds like a drunk and disenchanted priest.

Lot's wife (Hermione Gulliford) enters and, instead of being ashamed by Drogheda's distaste for her, she gets off on it. Words that should provoke disgust – 'degraded bitch' – prompt excitement instead. Gulliford rattles off her words with great speed yet utter control. She's like a purring machine, with razors attached to her wheels.

Time and again, the atmosphere flips in directions unexpected. When Lot (Mark Tandy) finally appears, the sexual tension between Lot's wife and Drogheda ratchets up a notch. Interestingly, the angel is easily the most human character here; the only one with messy emotions. Lot and his wife are horrifically studied. Lot does not speak freely. He catches his words, self-editing at every moment. He is like a tired lecturer, educating no-one.

There are some horrifically disturbing juxtapositions in this play, forcing emotions together that have no business being in each other's company. When Lot's wife and Drogheda finally kiss, they do so accompanied by the silent screams of a waiter, who Drogheda has rendered blind, deaf and dumb. Their leisurely kiss and the waiter's frantic, silent screams sit so strangely together. The waiter sits on the edge of the audience and it feels horrendous, wedged amongst his despair.

The relationship between Lot and his wife slides about strangely. They're most in love when their relationship is in peril. Lot is a man who 'yearns for betrayal' and his description of his wife's infidelity, often carried out in his sacred study, throbs with longing. In fact, Lot only really sees his wife when she is absent. There's a mesmerising scene, when Lot describes the imagined encounter between his wife and Drogheda in minute detail. Again, it's incredibly uncomfortable to watch this husband come alive only at the thought of his wife's infidelity.

Director Robyn Winfield-Smith manages this piece with real sophistication, never allowing scenes to grow too surreal. This play could've been extravagantly odd but to Winfield Smith keeps things understated, never allowing us the safety of seeing something remote or untouchable. The twisted contradictions pulse through the very last moment, when Lot and his wife are set to make their escape. It could be a happy ending but is punctured with Lot's final cry to the waiter, 'Can't take you. CAN'T TAKE YOU!'. Wherever those two are going, they're going with each other. I might just stay behind and burn in hell.