'But I cd only whisper' review or 'Blisteringly sensitive theatre' 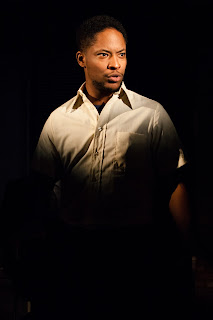 Six actors traverse a tiny stage; running, stumbling, freezing and fleeing. We are in 1970s America and the fear and friction on the streets is palpable. Such elegantly expressive scenes permeate Nadia Latif's fine production, which marks the début of both the new Arcola Studio 2 and US writer, Kristiana Colón.

'but i cd only whisper' is a beautifully sophisticated play, which combines monologues, fantasies and flashbacks to tell the story of black Vietnam vet Beau Willie Brown. Beau stands on trial for a terrible crime and a psychiatrist must now determine his sanity. As Beau opens up, a murky picture emerges of a man at battle with himself and society.

There's such variety to this intelligent and sensitive production. All the scenes tingle differently, with humour, tenderness, rage and lust. Abstract projections accentuate the atmosphere and develop the already complex characters. As Beau's girlfriend, Crystal (Emmanuella Cole) defends her loyalty to her abusive partner, images of her battered face flash up behind her.

Adetomiwa Edun wrestles brilliantly with a hugely demanding central role. His Beau is initially charming, all velvety smoothness. But there's something ugly glowing beneath that grin and, when his violent outbursts come, they are shocking yet credible. As Beau's past caves in on him, he twitches horribly as if frozen to the spot; a man imprisoned in his own skin and defined by its colour.