'Home' review or 'When a storage space became a stage.' 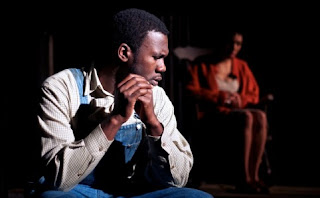 Tucked away in a vast Industrial Park in South Peckham is a new theatre, The Last Refuge. Once a warehouse, this glorified storage room now contains a grungy chic bar and a small stage. The venue only opened in September and needs time to, quite literally, warm up. This theatre is freezing. But artistic director Rania Jumaily is providing free performance space for emerging artists and for that she must be applauded.

There are 21 shows in this inaugural season, all loosely connected by the idea of home. Samm-Art Williams' play, 'Home', picked up 2 Tony nominations in 1980 and is an elegant American folk tale, shot through with lyricism. It tells the story of Cephus Miles, a simple Carolina farmer who winds up in jail during the Vietnam War, is spat out into the 'monster' city and finally returns home to his sweetheart and his other lifelong love, the land.

Unfortunately, director Vic Sivalingam has encouraged slightly crude performances. This approach yields some laughs - such as Pearl Mackie's cracking turn as a bonkers drugs dealer – but all the subtlety is lost. Joel Trill recalls Cephus' youthful japes with great gusto but struggles with the tender scenes. He isn't helped by the booming acoustics. It's hard to loose oneself in the quiet magic of tending to the land, when everyone's screaming about it.