'Nosferatu' review or 'Does anyone else feel dead inside?' 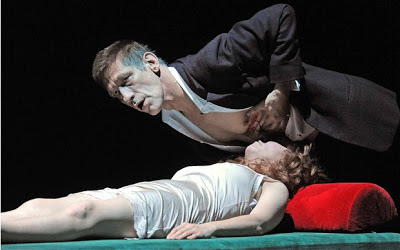 T R Warszawa's version of '4.48 Psychosis' all but killed me, it was so good – but this classy Polish company hasn't half ballsed up their homage to Dracula, 'Nosferatu'. The production stutters along at a stultifying pace, enshrouded in a cloud of boredom and confusion. The few scenes that attempt to transcend this haze and frighten us are frighteningly, laughably bad.

The trouble with 'Nosferatu' is that it's patently trying to be something radical when it is, in fact, a fairly straight forward re-working of Dracula. All the main plot twists and characters are here – they've simply been stretched out and rinsed of all their colour. Director Grzegorz Jarzyna's script is, at heart, pretty basic, only it's been thickened out with a whole lot of waffle.

So, the first twenty minutes or so could be summed up in one sentence: everyone is very hungry. Only, this is a profound production, so there's a lot of disconnected musing about particles, time and memory. It's all terribly dull and the actors, lost in a vast space populated only by a dining table and a few chairs, seem out of synch and out of sorts.

The key to any good adaptation of 'Dracula' is surely a tense atmosphere but this show feels incredibly flat. The sound and lighting effects are so repetitive that they quickly grow hackneyed. There are only so many times we can see curtains billow, amidst dry ice and humming music, before the repetition renders such touches pointless.

Red-haired Lucy (Sandra Korzeniak) is where the tension in this piece should rest. She's already been bitten by Nosferatu/Dracula at the beginning of the show and the first half tracks her capitulation. Yet she's so cold and so silly that one wishes she'd simply switch over to the dark side. She spends an awful lot of time walking, in a hypnotised state, towards doors that blaze with white light. Every robotic walk is capped off with a dramatic swoon. She faints so much that, again, it feels silly and not in the slightest bit threatening.

When Nosferatu (Wolfgang Michael) finally arrives, he's largely a figure of fun. He delivers a number of clanging punchlines; 'I never drink...wine.' Michael's delivery is incredibly lethargic; he sounds like a slug talking. Later, when we see him in his lair, he is hidden behind a screen and positively choking in dry ice. It is an incredibly camp setting, which is odd considering this is such a pseudo-classy production.

In fact, all the 'horror' moments are bizarrely overdone and in stark contrast with the rest of this achingly low-key show. When Lucy greedily sucks blood from one of her victims, she guzzles incredibly loudly and pops her head up, dripping in blood. She turns around and glares at the audience. The kid next to me couldn't help chuckling. Neither could I.