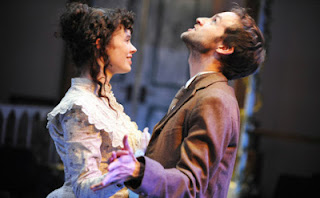 The Henrik Ibsen most of us know of wrote in jet-black ink, a sigh never far from his lips. But he wasn't always so gloomy. In 1862 he wrote 'A Love's Comedy', which is now receiving its first major London production. Like Ibsen's bleaker later work, this is a damning portrayal of conventional marriage. But there are plenty of chuckles, too.

Sam Dowson's naive set paints a romantic scene, with lush green grass and a swirling blue sea. It is summertime at Mrs Halm's (Julia Watson) country house and love is in the air. Even moody poet Falk (Mark Arends) has fallen for the bolshy and beautiful Swanhild (Sarah Winter).

First-time director David Antrobus keeps things very light in the first half; a touch more irony would've been nice. Translator Don Carleton has all but done away with Ibsen's original verse form. Only the poet and his paramour speak in verse and they sound a little twee.

The cynical second half is more interesting, with the characters defending their now 'settled' existences. Here the author launches a fierce attack on the trappings of marriage - 'And then the bills come'. Not quite vintage Ibsen, but a teasing glimpse of things to come.