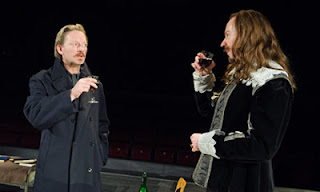 Soldiers of Cromwell's New Model Army huddle around a fire, cold and anxious. Somewhere off-stage, parliament is voting on whether to bring Charles I to trial. The motion will be voted down, parliament viciously purged and Charles imprisoned and eventually executed on 30 January 1649.

Yet we will see little of these key events – or even key figures - in Howard Brenton's compelling and sophisticated play, '55 Days'. Cromwell and King Charles do feature here but the peripheral figures play equally crucial roles. This is a play of and about the people, which effectively uses low-key scenes and modest figures to unpick a pivotal moment in British history.

Many of the most expressive scenes are domestic ones. A conflicted Lord Thomas Fairfax (Simon Kunz) seeks advice from his wife. Although loyal to Cromwell's cause, his Christianity will not allow him to commit regicide. Their row is cut short when Lady Fairfax notices her husband's haggard face: 'You look so very tired.' It's a typically simple but loaded line, which suggests the huge strain placed on these god-fearing men, forced to bring down the one man they believe to be most closely connected to god.

Cromwell (Douglas Henshall) expresses this internal and national conflict when he rages: 'The country is ripped to bits. Why should we not be?' Indeed, Henshall's Cromwell is a man heaving with contradictions: he speaks softly when he is most angry and struggles to get his words out, as if debating their meaning until the last possible moment.

It's always tempting to cut psychological corners with historical figures but Charles I (Mark Gatiss) is equally complex. Decked in a velvet cloak with lace edges, the King is the only character in period costume and pointedly out of fashion. Gatiss bravely underplays his role and, initially, the King seems a little underwhelming. But this only makes Charles' dazzlingly defiant display in court all the more exhilarating.

Director Howard Davies keeps everything simmering at a wonderfully low setting, only letting his characters and stage effects boil over at crucial moments. Davies and Brenton have carefully eschewed the epic tendencies of a history play and created a profoundly moving, human drama instead.