'Constellations' review or 'Scratching out a beautiful melody' 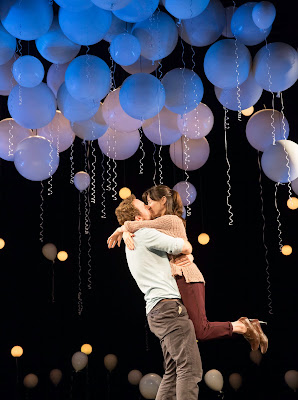 'Constellations' is a supremely clever play – but don't let that put you off. Much like Lucy Prebble, Nick Payne wears his intelligence lightly. Yes, this is a piece about quantum cosmology and the possibility of a multi-universe, where all our rejected choices play out in another time and place. But this is also a sweepingly romantic and gentle play, which tugs at the heart and mind.

On a stage filled with balloons – some soaring and others sinking – a bee keeper (Rafe Spall) and a quantum cosmology researcher (Sally Hawkins) play out their love story. But this is a love story with a twist. With infinite twists. The record keeps on 'sticking' and key moments in the couple's life are repeated endlessly, only with tiny changes. It's a bit like 'Sliding Doors' – only with a revolving door that leads to countless exit points and possibilities.

Such a jolting script demands incredibly secure but nimble performances, as the actors jump between joy and rage, comedy and tragedy. Michael Longhurst must have directed Hawkins and Spall within an inch of their lives yet the performances never feel mechanical – just tender and honest.

Rafe Spall's beekeeper is particularly moving. In some scenes, he all but rips his chest apart and chucks his heart into the crowd. Spall has always been excellent at comic awkwardness but it's his vulnerability that's the real revelation here.

Perhaps pressured by the larger space (this production has transferred from the Royal Court), Hawkins slightly over-plays her comic scenes. But she soon settles into a performance both delicate and defiant.

Longhurst directs with great flair, weaving the jolting scenes together yet also keeping them brilliantly distinct. He's more DJ than director, scratching the record with such skill that eventually those 'jolts' become a brilliant melody in their own right.