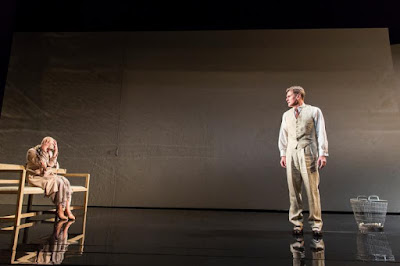 To mention or not to mention? Last night, a man had a (presumed) heart attack in the stalls of the National Theatre a few minutes before the end of Roger Michell’s production of Harley Granville Barker’s play ‘Waste’. Many critics might choose not to mention this event and I understand that approach – there’s etiquette to think of darling – but it was a horrible moment, shared by all of us, which inevitably had a massive effect on the show’s closing moments. It would be odd and dishonest not to mention it.

A few things to take away from this event: one, the incredibly fast reaction of the doctor in the stalls. A woman cried out ‘Is there a doctor in here?’ and said doctor clambered over the stalls in about 2 seconds flat. I’ve never seen anyone move so quickly in the National and it felt, to me, a visual confirmation of all that is wonderful about our doctors and the NHS. Second: the reaction of the audience. For a minute, the whole theatre felt stung. It was if something terrible had crept in beside us – but it didn’t take long for a delicate murmur to flutter through the audience. It says an awful lot about the Brits’ weird ability to push on through and made me think deeply about our national character and the parts I like and do not like. Finally: the reaction of the bods at the National, who decided to finish the show – with the man stabilised but still lying down in the stalls. I don’t know whether there is official protocol here and I do know it must have been a horrible judgement call to make. But I wish to god they hadn’t done it. Never have a few minutes in the theatre felt so completely pointless. It was a deeply unsettling end to the night and one that I will be thinking about for a long time. I do hope that the man and his family, wherever they are now, are doing OK – and don’t consider me a totally indulgent bastard for getting on with my review.

So – Waste, by Harvey Granville Barker. This play – written by Shaw’s protégé (and gawd can you see the attraction between these two heavyweight playwrights) – was originally censored back in 1907, ostensibly due to the mention of back-street abortions although more likely down to Granville Barker’s drippingly cynical take on the oily machinations of British politics. Anyway, we begin in an England led by a frail Lib-Labour government, with the Tory party ready to pounce in the wings. It all sounds thrillingly familiar, doesn’t it? I guess it is – and there are moments that feel horribly pertinent but there is a tidiness about the parallels being pulled out in this production that sometimes feels a little wearying.

The hero and anti-hero, ideologue and all-round selfish tosspot of our play is independent politician Henry Trebell, played with hollow charm by Charles Edwards. This is a man with big ideas: he wants to help the Tories put through a disestablishment bill and use the Church for useful things like education. For now, at least, Trebell is the darling of the Tory party, who are keen to sweep into power on the wave of big ideas. At the beginning, we find Trebell engaged in a cool love affair with the flighty and not-yet-divorced Amy O’Connell (Olivia Williams). Their flirtation plays out on a black and shiny stage, with a huge moon gleaming overhead. Frankly, I have no idea why that moon – designed by Hildegard Bechtler – is so damn big. It looks like it might fall down at any moment and kill our two lovers on the spot. In fact, I spent a lot of time trying to ‘work out’ Bechtler’s elegant set, which can’t be good. Lots of the scenes play out on a vast black stage, with two screens perched across the back. Sometimes – especially when we are with the Tories – the stage looks like an odd romantic painting, with a piano perched on a glimmering black floor and beautiful people draped in elegant positions. At other times, the set feels more like an abstract piece of art and is punctuated with stand-alone screens and concrete slabs. The only time the set opens out is when Trebell sits at his office, huge and cream and beautiful. Perhaps Bechtler’s design is meant to represent the limitations of Trebell’s work-obsessed existence. Perhaps it is meant to suggest a clash between the old and the new. I’m not entirely sure.

Anyway, Trebell and Amy flirt beneath that giant moon and Trebell gets his dastardly way with her. Williams seems a tad uncomfortable in the scene, as if she’s trying just a bit too hard to be ‘carefree’. But the next encounter is much more interesting. Amy is pregnant and determined to get rid of the baby. Trebbel ‘hates waste’ and is anti-abortion, although he couldn’t give two hoots about the consequences the birth might have on Amy’s life. It’s an ugly scene, with both characters as awful as they are sympathetic. Williams really goes for it and she is desperate, shrill, brave, cruel and bonkers. Edwards’ Trebell is a heroic vision in cream, a slimy coward, a work-obsessed brute and a thoughtful gent. Ultimately, though, Trebell’s work wins out. Those huge walls are pulled across for a meeting and, when they are opened again, Amy has disappeared.

Act Two opens with an epic political pow-wow, as Party Leader Horsham (Michael Elwyn) and his cronies decide the future of Trebell – who is now immersed in scandal, following Anne’s death at the hands of a botched abortion. You can practically feel Granville Barker getting hot under the collar (and high-fiving Shaw in the process), as he sticks the knife in the Tory politicians, as they slimily scheme to save their party. At one point, O’Connell’s estranged husband cries out: ‘You’re all part of your age – and you all voice the greed and folly of your age.’ We’re at the National so obviously nobody whooped – but a part of me very much wanted to.

Edwards never tries too hard to make us like him. It’s terrible to watch him suffer heart-break not at the loss of his lover and child – but at the loss of his beloved dis-establishment bill. One feels deeply for the selfish bastard. There’s a gorgeous scene near the close between Trebell and his devoted sister Frances (Sylvestra Le Touzel), who Trebell only seems to notice now that he is close to the end. Touzel’s Frances brims with hidden dignity and strength. In the final scene, she sits alone at her brother’s desk. It’s a hopeful sign of things to come, which – sadly – feels equally pertinent today.