'Baddies' review or 'Who's afraid of the big bad wolf?' 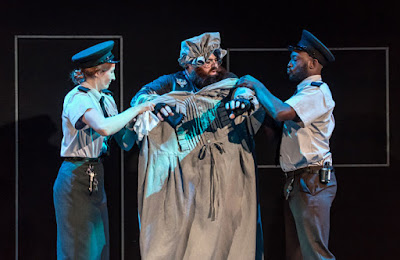 I haven’t seen an audience this pumped in a long time. Seriously, by the end of Nancy Harris’ musical ‘Baddies’ the kids were practically frothing at the mouth. I was practically frothing at the mouth. Sure, I have a few ‘critic hat’ quibbles about ‘Baddies’: it’s a bit too long and occasionally gets bogged down in bitty details. But seriously, who really gives a damn when the audience is having this much fun? This isn’t a perfect script but it is, without a doubt, one cracking kids’ show.

Harris’ musical is set in fairy tale land – yes, you know the place – where all our favourite goodies and baddies, including Pan and Hook, live. Only something very strange is going down in this neon-edged landscape (James Button’s set is punchy and clear): all the baddies are being locked up in jail. Just when the big bad wolf (Dean Nolan) begins to the think that all is lost, Pan and Cinders turn up to save the day. But are the goodies really the heroes of this tale?

‘Baddies’ has some juicy messages at its heart: don’t judge on appearances, don’t fall for stereotypes and remember that life wouldn’t be nearly as much fun without a little trouble and danger thrown in the mix. The lessons are in here, then – hell, there’s even a maths test at one point – but it never feels like Harris is actively trying to teach us anything. Instead, ‘Baddies’ helps the children think about things largely by encouraging them to scream and jeer, high five and whoop.

Initially, the kids boo with delight at Nolan’s Big Bad Wolf but a heart-felt song (Marc Teitler’s music has clean lines and genuinely moves) and a hissy fit in the face of a tiny mouse pull the children in. Miles Yekinni’s Hook is gloriously sinister – and great fun to hate – but he actually turns out to be a lawyer and one of the most sensible chaps on the block. The two Ugly sisters (Claire Sundin and Kelly Agbowu) are surly and snide but one cracking song – about a life constantly led in Cinders’ shadow – gradually pulls us closer. A lot of the songs sound like things we might have once hummed to ourselves in the playground, had we been precociously talented young kids. They sound like songs that a child might hold close, were he or she being bullied in the playground.

Director Purni Morrell – who is a proper pro at getting children to think with their hearts – teases and twists the children’s reactions. Cinders (Kathy Rose O’Brien) swoops onto stage in a glittering dress that is basically made of magic and the whole damn lot of us swoon. Pan (Christian Roe) swaggers on next and his blonde hair and twinkling smile instantly place him at the top of the class. But as the plot shifts (and there are a few creaks here, it has to be said), these good guys turn sour and the children turn with them. By the end the kids – who had only minutes earlier scampered from their seats to pick up Pan’s fancy business cards – are screaming their disgust at Pan with all the scorn they can muster and practically begging the wolf to buck up and carry on. I’ve no doubt these kids will leave the show pumped as anything – but they’ll also leave the theatre realising they grew to love the people they first hated and that often in life, the story isn’t as simple as it first seems.