'The Hairy Ape' review or 'Come on, it'll put hairs on your chest!' 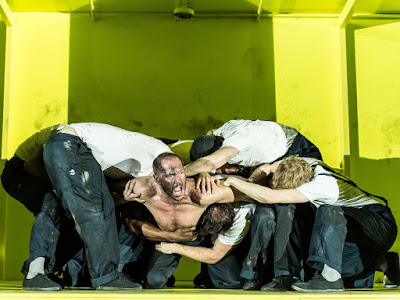 Eugene O’Neill didn’t think of the ‘Hairy Ape’ (1922) as an example of expressionism.  Instead, he referred to his play as an example of ‘super-naturalism’. The man makes a very good point. ‘The Hairy Ape’ feels a bit like normal life, only all the dials have been mashed up. The dialogue sounds fairly realistic – except for the times the play takes a magical pause and gusts of lyricism are released. The scenes are relatively commonplace but there’s something a little strange about the settings and certain details are bigger and starker than you might expect. The characters seem fairly grounded but there are moments when they look inside themselves and find answers that they did not know they were seeking. It’s a bit like ‘normal’ life has been dumped into a massive fish tank with loads of drugs and dye, and some crazy bastard keeps angrily shaking the tank. The crazy bastards in question are Eugene O’Neill and director Richard Jones, who has created a beautiful, strange and spiky production with a few moments of quiet truth that glow as brightly as the moon.

The play begins in the stoke-hole of a giant ship where Yank (Bertie Carvel) and his fellow ship-workers are cooped up and feeling restless. One chap with socialist tendencies keeps banging on about the fact that ‘All men are born equal’ and another romantic old-timer, Paddy (Steffan Rhodri, on mesmerising form), keeps wistfully talking about the good old days – before the engine came along – when the ship-worker and the ship worked as one. Everyone is looking for a fight. Designer Stewart Laing has imagined this stoke-hold as a massive crate – blazed in neon lighting – with a barred door at the side. Everyone looks trapped. Carvel’s Yank looks particularly hemmed in and spends a lot of time swinging on the bars on the ceiling. Yank has no time for Paddy’s wistful blubbering and is proud to be part of a modern ship, strong and thrusting forward.  But Yank looks like a caged beast as he booms out his bravado and it doesn’t take the most astute audience member to sense that trouble is coming for this palpably conflicted soul.

A great white screen drops down and on it reads: Douglas Steel. All the dirt and sweat and heat of those cooped up workers instantly disappears and Richard Jones – with one fell swoop of Laing’s brilliantly bold set – pits the workers against the rarefied rich bods who control them. The worlds could not look or feel more different. It is a contrast that Jones will continue to tease out with visual bravura. Out on this white and horizon-less peer we meet Mildred Douglas (Rosie Sheehy), a young rich lady who is simply determined to make a difference in life. She wears a bright white dress and spends a lot of time twirling about and generally making a show of herself. When Mildred enters the stoke-hole – for this little lady is determined to ‘touch’ the gritty real life she has heard so much about - she spots Yank’s dirt-streaked and sweaty body and lets out a curdling scream. This is the moment when Yank’s crisis begins. How dare this broad scream at him? What made her do this – and is the rest of the world screaming at Yank from the wings?

The language, the characters, the set and just about everything in Richard Jones’ tight but necessarily fragile production shatter as Yank’s idea of himself and his place in the world gradually dissolves. It’s a bit like watching a giant kaleidoscope being crushed into tiny pieces.

Yank stops off in New York. The streets are reflected with a few bold markers: one boxed-off shop has a JEWELRY sign over head and in the window sits a display of gleaming diamonds. Next to the jewels is a sign that reads FUR and, inside, a beautiful coat made of monkey’s fur. Yes, monkey’s fur. Yank stalks about the black stage, angry and lost. A congregation of rich church-goers spill out onto the street. They wear masks with a touch of Noh about them, only they’re essentially white tights pulled over their heads. The congregation wear black and dance about the stage as if the floor is made up of tiny toothpicks that must be avoided at all costs. Yank tries to punch them but his punches do not reach them. It is only when Yank disrupts a congregation member’s routine – and forces him to miss his bus - that Yank is eventually thrown in jail.

The jail looks a lot like the stoke-hole, only it’s even smaller and more intense. A glaring spotlight falls on Yank and it is here, quiet and defeated, that Carvel makes his mark. There’s something about the earlier and shouty scenes that doesn’t quite fit with Carvel, as versatile an actor as he is. He sounds knackered and something in you longs for Carvel to leave and Marlon Brando to storm on stage and scream out, ‘I COULD’VE BEEN A CONTENDER!’ But here, in jail – and in the later and more reflective scenes – Carvel dazzles. He is a man looking inside himself for the first time; a man bowled over by what he has found. There’s a stunning line just before Yank is chucked in prison: ‘There’s something deep inside yourself and it isn’t your stomach.’ That is what we watch Carvel discover. In a different play, that discovery could have been a beautiful thing. Here, it’s fucking devastating.

The scenes break down further and further until Yank finally finds himself at a zoo, staring at a huge ape prowling about in a cage. Over the cage floats a giant balloon, with a picture of Douglas Steel plastered over it. The image of the moon is peppered throughout O’Neill’s play. Lots of the time it is a symbol for hope, for nature, for something beautiful about the connection between man and the planet in which he lives. But here – in the dying moments of Yank’s broken life – the moon is everything that mocks Yank and all that he might be. And that ape; it’s everything that Yank both loves and loathes in himself. It’s his very own tragedy bundled up in the form of an animal. It could’ve have been such a terrible scene, since in lots of ways it’s too much – too obvious – and part of you will want to cry out, REALLY? But it is a scene that, if played right, creates one of those beautiful moments in theatre when you feel you are experiencing a truth – a proper graspable truth about life – played out right in front of you. As Carvel stares at the ape and the ape stares back at him – and we stare at the two staring - we feel deeply just how hard it is to be human. All that advance, all that progress – and yet a buried part of us will always want to climb into that cage and stand side by side with the animal inside.