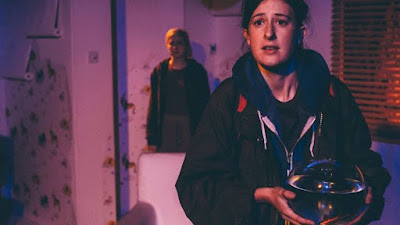 Two sisters reunite after 12 years and their past comes back to haunt them. Sounds a bit old hat, doesn’t it? But ‘Sparks’ isn’t what you think it is. It is a beautifully low-key family drama that purrs with feeling. Until the closing moments, the plot doesn’t matter a jot. Instead, Simon Longman’s sparkling new play is held together by honest performances, soft emotion that stings and lots and lots of laughs.

The opening is all nervy giggles as Jess (Sophie Steer) – home after so long – babbles frantically in the face of her shell-shocked sister Sarah (Sally Hodgkiss). Longman’s dialogue flows like water: it’s natural and fresh and ripples with energy. Steer commands Longman’s script brilliantly, lending it shape, texture and depth. She talks and talks (and drinks and drinks) but the constant peeks at her sister’s face and the endless refrain – ‘I’m not mad’ – suggest the buried feelings beneath that endless chatter.

Director Clive Judd gently massages the production at just the right moments, in just the right ways. When the sisters’ memories of their troubled childhood – and their sickly mother – push to the surface, Mark Dymock’s hazy lighting and Giles Thomas’s tingling sound design pulse in response. Jemima Robinson’s set is clean, white and sparse: a half-papered living room with old nursery designs peeking through the gaps. All the little rips and tears in this production hint at a sad but cherished past, which these two sisters have spent a long time trying to forget.

The show is packed with subtle moments that brim with bruised meaning. An anecdote about some kind folks in a chip shop throbs with unimaginable warmth. Jess’s description of a ‘big shop’ – and the family and belonging that little gesture suggests – is choked with regret. It’s just a shame that Longman introduces a plot twist in the final scene. It isn’t necessary: the despair and joy, loneliness and connection, which family can provide is bundled up in the very fabric of this show.