'Lines' review or 'Who's the commanding officer?' 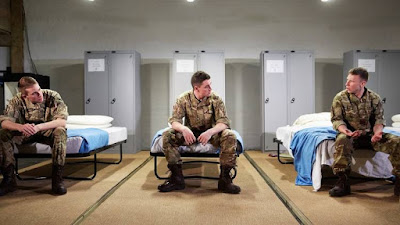 How often do we hear about the everyday life of a solider? We read about their deaths and the causes that they are fighting for but life in the ‘lines’ – the accommodation where the soldiers sleep – is a relative mystery. Pamela Carter’s new play looks at the squabbles, fears and fantasies that simmer between soldiers in the gaps between fighting. It’s a subtle and slowly creeping play, directed with finesse by the Yard’s properly talented artistic director Jay Miller.
Alex Lowde’s regimented set consists of four neatly made beds lined up against four grey lockers, with four perfectly aligned lights hanging overhead. It looks as if everything has been measured out in millimetres. This is a world of order and peace – a reflection of the fact that this is the first time in 100 years that Britain has not been engaged in combat. But as we watch four new soldiers gradually accommodate to army life, ugly undercurrents wriggle to the surface.
As the new recruits squabble about shower gel and Skips, videos of soldiers in the field are projected above their heads. Josh Grigg’s sound design sparks and flares until it becomes an angry pulse that underpins the action. An off-stage general delivers commands in a warped and booming voice. It is as if the war is tapping angrily at the window, demanding to be let in.
Carter’s play is based on real-life interviews and the bristling banter feels spot on. The acting is loose and natural and Robbie O’Neill is particularly good as the shakily macho Mackay. There are, however, a few script-based blunders. Carter frequently employs the third person – ‘Mackay is frightened’ – and it feels a little naff. The structure is frankly all over the place. But this is the type of show that’ll keep you awake at night, frightened about those dormant dark parts of you that might just wake up – if someone gives the command.