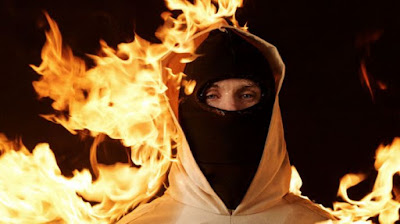 A performer is standing on a clear and black Dorfman stage. This is performance artist Cassils and they are half naked. Cassils has an incredible body; ripped and toned but with feminine lines too. For a good few minutes Cassils stands on the stage in silence. Cassils looks vulnerable, all alone on that great empty stage, but their eyes are rock-hard and their body, so thin but so strong, looks like it is capable of just about anything. We all look at Cassils and Cassils looks out at us.

Two men walk on stage. They are wearing protective suits and eye gear. They begin to dress Cassils in protective clothing. This is necessary, you see, because Cassils is going to set their body on fire. The two men slowly cover up Cassils with layer upon layer of clothing, all of which is covered in some strange globby liquid. As the two men carefully dress Cassils, images flash through the body of care homes and nurseries. Cassils looks really old. Really young. Dependent on the kindness of others.

As the procedure continues, the details grow more and more elaborate. One, two, three pairs of sloppy trousers are placed over Cassils' body. Endless layers are placed over the upper body and various masks for the head. The men bring out a tub of what looks like Vaseline and rub it over the exposed areas of Cassils’ skin, eyelids and nose; all the tiny areas that will allow Cassils to breathe but will also leave this performer exposed to the red-hot elements. The more care that these men take, the tenser the audience becomes. The more these two attempt to eliminate any sense of risk, the more hopeless their task begins to feel. Try harder, you want to scream. You missed a spot. You missed and spot and this performer is going to burn!

It’s fascinating to watch the audience throughout this intense and hushed prelude. Some lean forward in their seats and others lean back. Everyone holds their breath. There are lots of giggles and a few hushed whispers. The stomach knots up tighter and tighter. The trio on stage whisper commands that we cannot hear. Is something wrong? Is this normal?

Finally Cassils is ready, despite the voice in your head that screams out: Stop!! They haven’t listened to your silent dissent and they are ready for the main event. Cassils stands stiff as a board, wrapped up in endless layers of clothing. We can just about see their eyes and they are open. One of the men lights a torch and strokes the flame across Cassils’ clothes: ‘You are on fire!’, he shouts  – and what a bloody weird statement that is – and Cassils is enveloped in angry golden swirls. Cassils stands on the spot with their arms stretched open. They do not move and neither do we.  And just as soon as it has started it is over: Cassils drops to the floor and the fire is put out. The audience sits and sits and sits. It is hands down one of the strangest reactions from an audience I have ever seen. No one knows what to do with themselves. No one knows how best to honour what they have just seen so, instead, we sit and say nothing.


Eventually we stream outside and watch a filmed version of Cassils on fire, recorded on an earlier occasion. The film has been slowed down to 1,000 frames per second. When the fire comes, it looks like it is part of the air. It looks beautiful and, despite all that we have seen, it feels harmless. It is stunning and scary in a vague sort of way but the heat has been sucked right out of the flames. Members of the public walk past and they do not stop to look. This performer has just been set on fire, you want to shout, but you can’t – or you don’t – now that you are out in the open. The only time you flinch is when the flames flicker gracefully towards Cassils’ eyes. That, and the moment when Cassils drop to the floor, which feels so different now it is in slow motion. With the action slowed down you realise that this fall, which looked like the end of things or even a defeat in the theatre, is in fact the moment when Cassils dropped directly into the flames. This is the moment when Cassils was in the greatest danger and you, sitting just a few feet away, didn’t even see it.