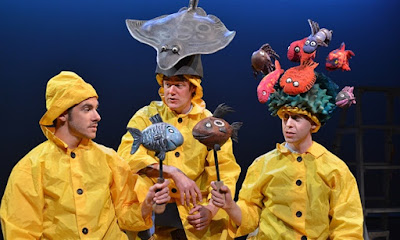 Tiddler and Other Terrific Tales comes with a warning. The show is based on four short stories written by Julia Donaldson but, in a jaunty opening number, we are told: “There’s no Gruffalo!” But fret not. Donaldson’s beloved brown monster doesn’t feature here, but just about every other living creature does. There’s a friendly giant, a cheeky monkey, an ocean full of fish and a house heaving with farmyard animals. To call this show lively would be a whopping understatement.
Delicate and sophisticated children’s theatre this is not. Sally Cookson’s production is packed with gleeful ditties and booming country songs by Benji Bower, and the three male actors (Joe Carey, Darren Seed and Maxwell James) are superhumanly upbeat and shamelessly silly throughout. Everything about Tiddler (made by the same team behind Stick Man) is joyfully over the top and jolly good fun.
My four-year-old theatre companion, Blue, barely says a word throughout the show. Instead, she sits bolt upright in her seat and happily sucks her thumb. Such good behaviour is virtually unheard of. The only other time I’ve seen her this entranced is during each of 4bn viewings of Frozen. 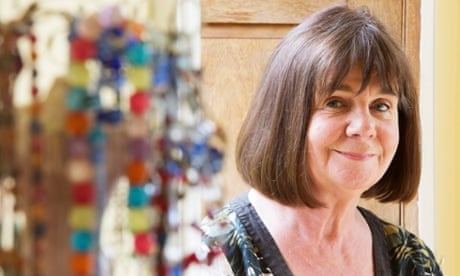 Julia Donaldson: why hearing children should find out about signing

Read more
Katie Sykes’s subtle staging and low-fi props have the same easy and friendly feel as Axel Scheffler’s original illustrations. There are few special effects and, instead, the children are encouraged to use their imaginations. In Monkey Puzzle (in which a little monkey hunts for his mum), an elephant is depicted using two big bags and a snaky toy for a trunk. A massive scarf becomes a slithering snake and lots of the animals are played by pillows, with little ears and tales poking out the sides.
In Tiddler, which tells the tale of a little fish with a huge imagination, the ocean is brought glimmeringly into life. Jellyfish wiggle underneath cleverly lit hands and shadowy fish swim beneath T-shirts. As we travel deep into the ocean, a huge shark – with beady eyes – is projected against the back wall. It’s at this point that Blue quietly clambers into her mum’s lap.
The only drawback is that Tiddler is a little too big. You would never tell your child four bedtime stories in a row, but that’s the aim here. It’s too much. Cut one story out and this Tiddler could grow up to be a big success.