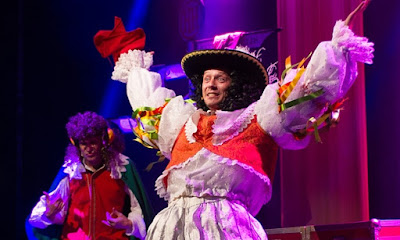 At the beginning of Horrible Histories: Barmy Britain Part Three the audience is asked a simple question: would we prefer poems and puppies, or murder and poo? A resounding cry comes back from the audience: Poo! And boy is there a lot of it. There’s also moody cavemen, a poncy puppet of King John, a fire that billows across the stage and a rapping Charles II. And did I mention the poo?


The Horrible Histories stage shows, which riff on Terry Deary’s popular books and TV series, have become a bit of a British institution. It’s not hard to spot why. Before the show my companion for the day, nine-year-old Esther, tells me about a brilliant history lesson in which the teacher dressed up as a monk. Horrible Histories is a lot like that – only with a much larger dressing-up box.
Neal Foster’s production, designed with a lovely sense of cheekiness by Jacqueline Trousdale, takes a while to warm up. At first it feels like a lukewarm lesson. There’s even a blackboard with a song about Vikings and Saxons scrawled on it, which the audience is encouraged to sing out loud. On stage, Anthony Spargo and Foster himself try valiantly to jolly the audience along but it all feels terribly British and terribly tentative. Esther rather tactfully describes this moment as “not despicable”.
But it doesn’t take long for us to get stuck in. The Rik Mayall-esque Spargo and Foster are a brilliant comic act: think Fry and Laurie, mixed with Little Britain and a dash of Monty Python. There’s a Cavemen sketch, which is bawdy good fun but also peppered with smart wordplay. In a skit about the “Magnum Carter” (geddit?), a tiny puppet of King John anxiously asks, “Is there anything about sweets?” There’s an excellent song about the party-pooping puritans and only a mildly embarrassing rap (“restoration for the nation!”) from Charles II.
It does get a bit talky in places and the show is sparkiest when the narrative stops and the naughtiness begins. As unlikely as this might sound, there’s a very funny sketch about the cholera epidemic in the 1850s. It involves a well that pumps real water, a lot of slapstick and – of course – a heck of a lot of poo. Esther deems this to be “properly disgusting” but there’s a sparkle in her eye as she winces with gleeful horror.