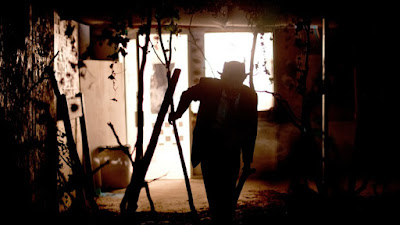 It’s a lovely summer’s evening and I’m sat inside a crematorium. A pale-faced chap greets me and hands me an empty urn. We have a very odd conversation and suddenly I am swirling through the underworld. I’ll witness fiery sacrifices, parched dead souls and Persephone wafting through a café. Eventually I will emerge blinking into the sunshine, giggling and gasping and seriously rattled.‘Styx’ is the latest immersive adventure from Rift, the company behind an overnight ‘Macbeth’ and a roaming version of ‘The Trial’. The term ‘immersive’ is used so loosely these days but this eerie whirlwind from director Felix Mortimer – which is a solo journey with headphones – is horribly and impressively intense. The show is only thirty minutes long but it’s packed. The voice in our headphones is our guide – our Virgil – for the night. He describes the real world around us and begins to tell us tales of the afterlife. As these stories unfold the ‘real’ world around us warps and groans and Joshua Nawras’s set, which is initially realistic, slides into the afterlife. There are some awful but beautiful scenes in here, when the two worlds (both inside our head and around us) collide. At one point, we’re told a tale of sacrifice as we are blindfolded and tied to a stake. In another scene, we sit in a freaky café as ghostly figures gasp for air. It’s exhilarating – but baffling too. Thomas McMullan’s script is gorgeously expressive but it’s much too dense. This piece needs to be stretched out a little and allowed to breathe; then it might just scare you to death.