'Every Brilliant Thing' review or 'Help me help you.' 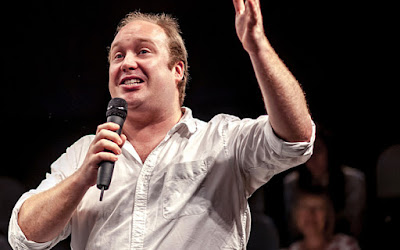 ‘Every Brilliant Thing’ begins way before it begins. Long before the lights go down (and I don’t think they ever go down completely in this exceptionally open show), Jonny Donahue quietly makes his way through the audience. He hands us little bits of paper, which have a number and a phrase written on them. He chats with us, smiles at us and charms the hell out of us. We are friends, old and close friends, before this one-man-show has even begun.

This is one of Duncan Macmillan’s most recent plays (it was first performed in 2013) but, in lots of ways, it feels like his first. That’s not to say ‘Every Brilliant Thing’ is naïve or shaky but it is a peculiarly honest and personal play. It feels a lot like a writer baring his soul. The central (and only) character is so authentic - all the gaps filled in by endless and believable details – that is hard to shake off the feeling that this piece is auto-biographical. Despite this specificity, ‘Every Brilliant Thing' sweeps the audience up and delicately places them slap bang in the middle of proceedings. The personal and universal tingle happily and movingly, side by side.

On those bits of paper that we clutch, nervously and carefully, are written individual items from a long list of Brilliant Things. Actor Jonny Donahue, with a beam plastered on his face (love me!), explains the reason for this list. When Donahue (and the actor and character merge quite seamlessly here) was just 7 years old, his mother – suffering from depression – attempted suicide. In a beautifully optimistic gesture, this young boy decided to write a list filled with the good things in life. As this boy became older and his tastes and outlook changed, the list changed with him. It became more abstract and perhaps a little more hardened but it is a list – read out loud by the audience– that we all recognise. It is a list that we mentally start writing for ourselves.

This is such a simple show but the beauty of it is in the way in which the audience is gradually pulled into the action. All that preamble means we are already deeply engaged from the off but a series of neat like tricks, engineered by Macmillan and director George Perrin and pulled off so effortlessly by Jonny Donahue, means that this boys story becomes our own. Audience members are called upon to help with various scenes. The chap in front plays the dad, a lady a few rows down plays the girlfriend and a tall and earnest looking bloke plays the vet. Audience interaction sequences so often crash and burn, especially with Londoners, but this time it feels effortless. We are on Donahue’s side from the beginning. We want to help tell his tale and bring his list, his reasons to be hopeful, into life.

The boy grows up and the mum does not get any better. Depression is an excruciatingly isolating condition and all the people and moments and senses that are in the reach of this kind actor are out of reach for his mum. She is the exception in this play, the invisible woman who cannot see what we can see. But what is so subtly moving about this play is what it does to the audience. This group of people, isolated and in god knows what mood before this show began, start to pull together. We look each other in the eye and we work in unison – without even thinking about it – to help this vulnerable chap in front of us. And that, Duncan Macmillan, is a very brilliant thing indeed.