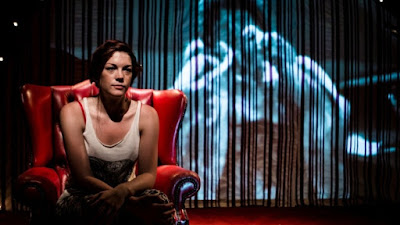 Grace Savage is delivering a lesson in beatboxing. She’s the UK champion so she knows her shit. We’re encouraged to relax our lips, frown and push our tongue forward. It sounds like a giant wet sneeze. And then Savage opens her mouth and begins to perform – stamping, beating, scratching – and the whole theatre tingles. Hers is a special talent indeed.

And I’d have been happy to watch Savage perform for hours. The problem with ‘Blind’ is that the beatboxing is kept to a minimum. Instead, this is a slightly sloppy smorgasbord of a show. There’s a thin autobiographical thread about Savage’s upbringing in Devon, an awkward beatbox lesson, some therapeutic scenes between her and her mum, and a half-hearted attempt to sketch in the history of beatboxing. If Savage weren’t so gifted and so charming, this show would be a stinker.

There are moments that glitter in Jemma McDonnell’s uneven production. In one scene, Savage produces an original beatbox (basically a sound machine) and hesitantly – then confidently – copies the sounds. We get a glimpse of the immense dedication and skill that is funnelled into her ballsy, freewheeling sets.

Fiammetta Horvat’s design feels a little muted and Savage spends much of her time lolling around on a large red chair. But there are some striking projections, particularly of a huge mouth jabbering away and a haunting clip of Ella Fitzgerald scatting her heart out. Savage practically melts when she watches Fitzgerald sing, and when she performs she is Fitzgerald’s equal only rougher, harder, twangier and – despite all the copying that beatboxing requires – utterly her own creation.