'Oresteia' review or 'Shall we call for fresh evidence?' 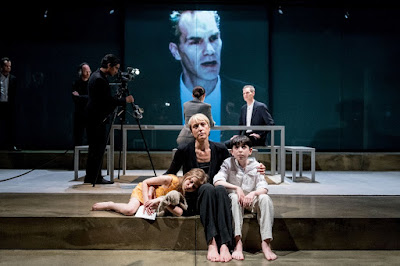 I’ve seen so many ‘contemporary’ versions of Greek tragedies that claim to be stark re-interpretations, but they’re just not are they? Playwrights seem so reluctant to radically re-invent what have become a collection of sacred texts that they merely tinker. The structure stays the same, the speeches stay similar and the whole context might be ruffled but it still feels – old. But Robert Icke’s version of Aeschylus’ trilogy ‘Oresteia’ is new. It is so goddam new. Not only that – it is present. Not just based on recent times or mildly redolent of some familiar context we might recognise but absolutely set in the moment. It is Now.

There are no masks in this Greek tragedy. There is little ceremony. There are no warriors. The characters are all in here but they are not symbols or relics. They are characters we might meet on the street today. The tragedy might still unfold in the House of Atreus but this house is not a vague and bleakly atmospheric setting. It is an environment that you will understand. Hildegard Bechtler’s set is cool and shiny and grey. A few tables and chairs fill the centre stage space and behind this foreground stands a wall of sliding glass doors. Sometimes these doors are opaque and sometimes they are see-through. Behind these walls are some stairs and a large, deep bath. This is the off-stage of our Greek tragedy but, in this version, we are allowed in. This is where those unfathomable murders take place and they are glorious and close and utterly believable.

The Agamemnon of our tale (played with cool, brittle authority by Angus Wright) is not a growling warrior but a smooth-talking politician. His brothers and followers wear suits and, in the build up to the war that he is destined to fight, Agamemnon delivers icy and slippery speeches to cameramen nearby. He is a politician and his wife, Klytemnestra (a deliciously complex Lia Williams) is a politician’s wife. Their words are shields and, beneath them, dark secrets and longings rumble. This is the mask that the modern Greek tragedians wear: the mask of public performance.

Their home is not an anonymous space, lent stature only by the myth that clings to its walls. It is a family home and, in the first few scenes (which take place way before the ‘official’ beginning  of ‘Oresteia’), they are filled with tender family moments and teasing banter around the dinner table. Robert Icke, who has written and directed this piece with exceptional control and verve, builds up and layers these moments with forensic precision. His text is spare and piercing; as if the original Greek text were a sculpture he has chipped away at to create something beautiful and new. As the family bicker together, their dialogue feels relatively low key (‘Tell me the story of your day!’) but, very carefully and very cleverly, Icke weaves a web beneath his script. Words like ‘judgement’ and ‘truth’ and ‘story’ pepper the play until the main themes flicker lightly behind every moment. Throwaway lines build and build until they are laden with foresight and malice; ‘Someone will get hurt one of these days!’ Instead of the heavy incantations that often clog up supposedly modern Greek Tragedies here we have a script that has loaded itself up in a completely different manner; the verse feels light yet it heaves with insight, depth and foreboding.

On top of this deceptively light verse, Icke lays the foundations for the final play in this trilogy, 'The Eumenides'. The Oresteia tracks the scorchingly inevitable implosion of the House of Atreus, as one ‘unnatural’ death leads to another and then another and then another. In ‘The Eumenides’, Orestes stands trial for the final murder in this bloody chain and, in Icke’s version, that trial frames the entire trilogy. Above the stage is a projection strip and, on it, we read various statements: ‘Time of Death’ or ‘Exhibit A’. Threaded in between the main action are fraught exchanges between Orestes (a tortured Luke Thompson) and his doctor (Lorna Brown). This ‘real’ story we are watching is actually in the past – and, really, it’s the perfect framework for a play, a genre, so obsessed with the idea of predetermined fate, a life governed by the whims of the gods and the curses and visions they exact.

And, yet, despite this predetermined framework there is a throbbing immediacy to the action on stage. We are constantly made aware of time ticking by and the exact moment of each death is projected – in real time – above the stage. When we break for an interval (and there are quite a few in this near 4hr production) a stop clock is projected above the stage and the actors remain in place. Even the breaks in action are folded into the present. Gradually, we become trapped in a web of conflicting time zones and, Christ, is it tense; we are encouraged to feel, quite vitally, that the action we are witnessing is unfolding in the moment, yet the framework constantly reminds us that this story is in the past. Over and over again, the line is repeated: ‘She was dead from the beginning.’ Icke traps and suffocates us with the awful truth that all that we dread has already passed.

This really is an exquisite experiment in how to create tension on stage (and, gawd, Greek tragedy is often so dull!) The opening scenes, in particular, are exceptionally clawing, frightening and intense. This is partly because Icke begins his ‘Oresteia’ way before the ‘original’ opening and so holds off on really beginning for a very long time. We arrive expecting to begin with Clymnestra and Agamemnon’s great confrontation but find ourself in a much gentler and more hopeful place. We begin with tenderness and friendship and gentle songs from a beautifully haunting little Iphigenia (Eve Benioff Salama). Agamemnon, who has heard from the gods that he must kill his daughter Iphigenia if he is to win the war, considers killing her a number of times. Every time Iphigenia is let off the hook, we begin to hope for something new. And when this first death finally happens – and what a clever, delicate and devastating scene it is – it is a surprise, yet it is shock that has been exquisitely prepared for. It is a death we understand rather than an obscure fait accompli, as is so often the case in other, mustier versions. This opening is crucial as it means that the domino death slide is set off by something we are invested in and captivated by. It means that the chain of deaths begins somewhere real, rather than mystical, and that makes all the difference in the world.

This extended chronology also helps to create characters that are no longer weird mouthpieces – as they so often are – but deeply conflicted and authentic human begins. Icke’s rhetoric is so persuasive that, for just a second, you might understand why Agamemnon believes that he must kill his child. Icke’s rhetoric is so slippery that, for the whole of the play, you’ll never quite understand Lia Williams’ Klytemnestra. She is raw and broken; calculating and cruel; loving and admirable; twisted and self-serving. It is such a rare pleasure to see Greek tragedians who can hold all the contradictions held within the play, rather than be subsumed by them.


The only time this psychological depth slightly falters is in the latter half of the play, when Electra (Jessica Findlay Brown) and Orestes take centre stage. The earlier murders are so carefully prepared for but, in the case of Electra and Orestes, there is little time to elevate them into this heightened, bloody-thirsty and near-demented state. It feels a little rushed and it’s one of the very few times in this production that I stopped – checked myself – and questioned, do I really believe?

But that is not bloody bad going for a play that crams so much in, twists our brains and hearts and makes us think about fate, justice, love for a family versus faith in a god – all without ever feeling like we’re trying too hard. Here is a Greek Tragedy where you will believe the deaths and understand the motives; where you will somehow fall for these ancient curses and prophesies and yet never feel like you have been transported ‘elsewhere’. Here is a Greek Tragedy to believe in.