'This is How We Die' or 'Are there any windows in this hole?'

This is How We Die, Chistopher Brett Bailey,
Battersea Arts Centre, 31st October 2014 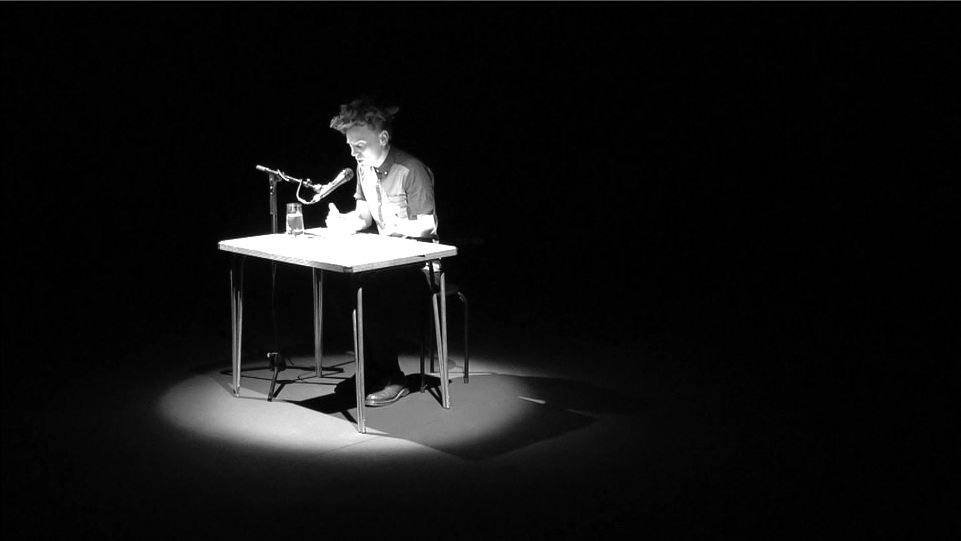 I’m not sure about this. It’s a Friday night, I’ve had a glass of wine, I’m a little bit shattered and that guy sitting behind a desk on an abandoned stage, cocooned in a half light, looks very earnest and very kooky and very, very tired. I’m not really sure about this at all - and then he opens his mouth and a wall of sounds hits me. There are words somewhere in all that sound but it feels like this man is screaming into my ear and through to my skull, blasting over and over again. I glance at my friend and she looks like she is going to piss herself laughing, or maybe just cry. This was probably a mistake. The whole show is starting to remind me of those silly scenes you see on films, when a couple of young things decide to give theatre a try, go out on a date, and are confronted with a steaming pile of pretension and – seriously – there are some beautiful phrases amidst all this noise and this man looks and speaks like a poet but am I meant to be understanding any of this? Am I meant to be hearing the words (a flicker of racism, of anger, the end of the world)? Is all this noise meant to hurt us, our eyes cast down and our cheeks flushed, part embarrassed and part just a little bit pissed off?

But then the man with the spiky hair and the socket eye face finally slows down and the noise lets up and he looks up at us for the first time. I hadn’t even seen him! With all that noise and all that battering sound, the hunched man in front of me had completely disappeared. But now his speech slows, his face bends up towards us and his eyes glitter. I look at my friend and she looks less aghast and more excited. We have both been drawn right inside this warped little Friday night show.

The noise has stopped and the scrunched up little man – Christopher – is starting to tell us a very strange story about a very strange road trip in a fucked up America with a very strange girlfriend. He speaks in a series of film shots and the images, hundreds of hundreds of them, pile up in our heads as this lonely little chap leads us through his twisted and sliding, cascading adventure. The man and his girlfriend stop at a petrol station and all hell breaks loose in a flurry of mutilated snap shots. We cut to a mini Jesus figurine car in the window, weeping or praying or doing something awful or weird. We glimpse a priest’s pair of boots and a little kid cowering inside. It feels like everything is about to explode. A snippet of music, and then another, whizzes in and out of shot, cutting through the story and insisting on its own boom, boom, booming beat.

And then this strange little man and his strange little girlfriend are visiting the in-laws – or did that come before, it’s hard to think straight with such a mind bending show - and the normal and abnormal collide. Girlfriend mummy and girlfriend daddy (who incidentally is really, no really, re-set in the shape of a walking swastika) sit down with their strange little girl and her strange little boyfriend – and they prod and they poke and spit and swear and a B movie vomits all over them; cars and wheels and limbs and blood; smashed glass and screams and laughter and chaos. The man and his girl move on, Thelma and Louise turned inside out and with all the sense and skin torn off, and they’re on the move again – but the boy keeps getting distracted, taking great yawning leaps as his imagination snags on a word, an image or a moment. His girlfriend tells him to go fuck himself and he runs through the reality, texting himself and dating himself, touching himself and finally – take this! – fucking himself, alone in his bedroom.

The images keep showering past us, like a million dark comic books stapled together, glued to our eyelids and flicked through, over and over again. The girl and the boy move on and the sense of something bigger, hovering above or around them, begins to settle in the darkest corner of our consciousness. They walk and they see the stars, the satellites or something else big and huge and unreachable that hovers above. They walk on together and they do very little but these vicious explosions of the imagination lift them up and scatter them about, taking them to places endless and awful and brilliant. They keep on walking and they throw their mobile phones in a stream and there is something in there, in all those seething and swelling thoughts and feelings and pictures, about the longing for a quieter life, for a life less connected but more engaged, for a life when that wall of noise stops smashing at our heads and something else, some little word or image or idea that we might just understand, wriggles free and allows us to catch it in our hands and really, really look at it.

And then this stuttering, streaming, streaking story stops as abruptly as it begun and we are left with nothing – until the lights – those lights that have been dimming and slowly turning their glare away from the stage and onto our faces – dim right down and musicians, just little patches of people in this whispering dim light, walk onto the stage and begin to play. They play quietly at first and there is something angelic about that music, just a memory of Bach, as the lights gradually, slowly slowly, begin to flare up and something close to joyful fills the stage – this is it, this is it, this is it! – but that instant of calm and beauty, that glimpse at the heaven we do not believe in but dream about anyway, that soothing snatch of meaning or purpose that might make sense of it all, is slowly lost in the gradual build of the music and the exposure of the lights, which all began as something comforting and beautiful but are becoming stronger and brighter, hotter and closer. The noise builds and builds and folds on top of itself and the lights push harder and harder at our faces and those little moments of meaning and respite are being smashed into nothing until we are left with a brick wall, a wall as big as the room and beyond, forced up in front of us and pushing and pushing and pushing until we cannot see, we cannot feel, we cannot breathe and we would do anything in the world to make it all - just - stop.