'Accolade' review or 'I'm having a devil of a day'. 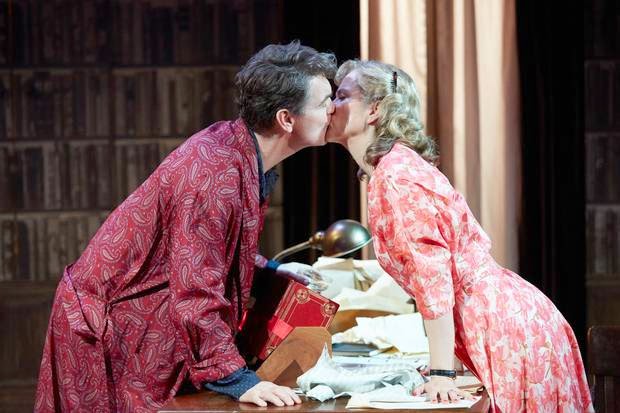 ‘Accolade’ is a fairly explosive play but it is beautifully contained in this mature and thoughtful production from director Blanche McIntryre. The action is limited to novelist Will Trenting’s study and, as the drama unfolds and Will’s second life threatens to shame and engulf him, the gentle tick of the clock can be heard in the background. There’s sex and scandal and plenty of booze involved in Emlyn William’s sophisticated play ‘Accolade’ but it is also quite a restrained piece, which forces no judgement and gently suggests we judge Will Trenting on our own terms.

The action opens on New Year’s Day, with the public announcement of Will Trenting’s knighthood for services to literature. Will (Alexander Hanson) and his wife Rona (Abigail Cruttenden) are ‘pleased as punch’ (we’re in the frightfully plummy 50s), although Trenting is a little dubious about this ‘accolade’. We soon discover that the seedy life that Will describes so well in his novels has been drawn from his own secret, sozzled and sexy ways, often spent among drinkers and prostitutes above pubs in East London. Trenting might be a renowned and respectable novelist by day but this self confessed Jekyll and Hyde figure is a bit of a scoundrel by night.

McIntryre introduces just the quietest tremble of threat to her production almost from the off. When Will’s rowdy ‘Rotherhithe’ friends, Harold and Phyllis, come over to celebrate Will’s news, the atmosphere tightens. The space that Will’s wife Rona and his secretary Albert instinctively create around Harold and Phyllis suggest the unbridgeable gulf between these two worlds that Will occupies. Phyllis wears a bright red hat and, as she nervously bobs around Will’s imposing study, little sparks of danger fly off her.  Will’s own transformation is also ominous. As his ‘no good’ friends arrive, Hanson’s Will morphs from a rather tight and plummy chap into a garrulous geezer, his eyes sparkling and his whole body somehow more energetic and alive.

James Cotterill’s set also emphasizes Will’s impending downfall but slightly over-eggs things. Will is practically cocooned in his study, with a giant wall of painted books curving around the back wall of the stage. Occasionally, this wall of books moves forward and the space grows smaller still. I appreciate that this is meant to emphasize the fact that Will, this self-made man of literature, has trapped himself in a prison of his own making but it feels a bit *much* in an otherwise light-footed production.

The acting really is ‘top drawer’ all round, old chap, and textured enough to allow our sympathies to easily – and confusingly – sway as the play unfolds. Hanson turns in a fittingly contradictory performance. He is a likeable old rogue and his ability to stick two fingers up to a blatantly hypocritical high society is something to admire. But he is also patronising, conceited and deeply selfish. When chancer Daker (a man so slimy and see through, you just want to punch right through him) turns up and attempts to blackmail Trenting about his seedy and, as it turns out, illegal second life, Trenting’s hypocrisy and snobbery (‘What a funny little man you are!’) takes the breath away. Were Daker (played with exquisite sliminess by Bruce Alexander) not so utterly detestable, then our sympathies would be turned away from Trenting for good – but Williams and McIntrye balance the scales (packed with dirt) so carefully that it’s impossible to settle on one side for too long.

Abigail Cruttenden, as Will’s wife Rona Trenting, is just knowing enough to keep the play in balance. She is treated fairly terribly by her husband but, as she asks herself in the later scenes, to what extent has she been complicit in her husband’s behaviour? There are only two elements that threaten the careful moral balance and distance this production achieves. The first is the presence of Trenting’s ‘sensitive’ son who is frankly so wet, and so obviously tugging on our sympathies, that it is hard not to flee in the opposite direction. The other factor the is the Jimmy Saville sex-scandal that has been unravelling over the past years – along with god knows how many other celebrities and ‘respected’ figures in positions of power. The horror of that scandal hovers over this piece and threatens to up-end it altogether. In the end, Trenting gets off quite lightly in ‘Accolade’. His publisher even admiringly and forgivingly mutters: ‘I’ll never get into trouble – but I don’t know if I’ll have ever lived.’ But what if that ‘trouble’ that ‘tramp’ Trenting (as his friends affectionately call him) is just the tip of the iceberg? It is a horrible fact to live with, but recent events have taught us that sometimes Dr Jekyll really is just the devil Hyde in nice clothing.