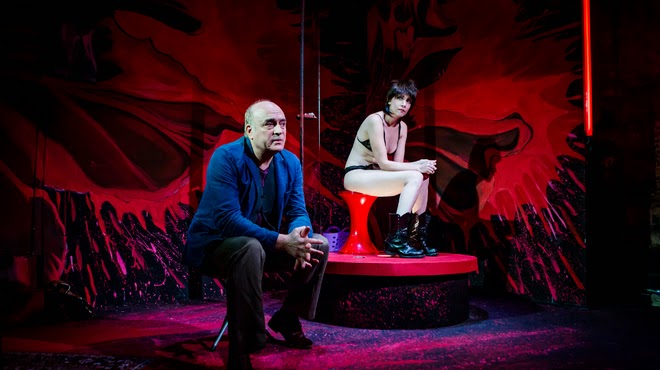 The walls are splashed with huge painted flowers, splayed open with the pollen suggestively poking out. Sultry music plays softly, absolutely everything shines bright red and a scantily clad dancer sways seductively in a small glass booth. ‘Go See’ is about the sex trade, sexual identity and isolation and isn’t the most subtle drama you’ll see this year.This world premiere is written by the late Norris Church Mailer, former widow of literary giant Norman Mailer. The central role of sexy Texan dancer Marie is intriguing – a lively combination of Tennessee Williams’ Blanche DuBois and the prostitute in ‘Pretty Woman’. Lauren Fox impresses in the role and her Marie is tough as old boots but warm and sparky too. Unfortunately, the chemistry between Marie and David (Peter Tate), the (much older) sexual anthropologist who has come to research her trade, is dire. Their scenes have about as much fizz as a week-old diet coke. Tate pushes his role too hard and his lines sound overdone. Sondra Lee’s directing is equally over-emphatic and each ‘significant’ moment is emphasised by the use of a glaring spotlight.  The overall effect is hammy and hamstrung. The scene changes are slow, the endless sexy music begins to grate and the relationship between these two ‘unlikely’ companions never takes off. At one point, Marie insists that David will never understand her. The lights snap off, the spotlight flares up once again and David grandly claims, ‘Oh I will!’ How wrong he is.