'Beached' review or 'Any one for another cream bun?' 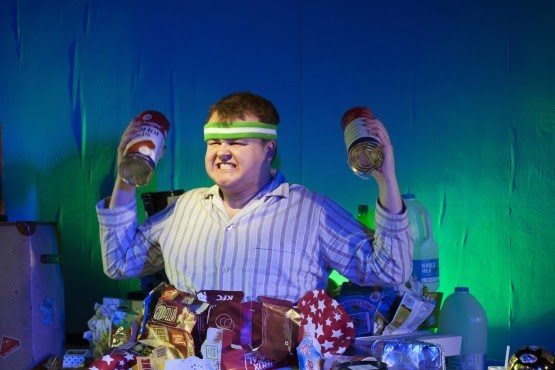 Arty weighs 67 stone. He is the fattest teenager in the world and has already had two heart attacks. There’s only one thing for it – reality TV. The promise of a free gastric bypass lures Arty and his mum JoJo into signing up for ‘Shocking Fat Stories!’ and Arty’s own Shocking Fat Story begins.

Australian writer Melissa Bubnic has written mainly for television – ‘Shameless’ and ‘Hollyoaks’ – and this is her first significant production in London. She has a gift for garish characters and some of her jokes are top-drawer: ‘Give a man a fish and he spends it on fags!’

But I’ve got qualms about director Justin Audibert’s uneven production. Lily Arnold’s cartoonish set, which sees young Arty cocooned in a mountain of junk food, sets the tone for a garish but light-hearted satire. Yet there is a lot about this play, particularly the abuse Arty suffers at JoJo’s hands, which feels deadly serious.

James Dryden brings real compassion to the soppy, one-dimensional Arty, while Robin Weaver is a gifted comedian thwarted by the downright bizarre character she plays: JoJo is sinister enough to spike her son’s Slimfast with glucose, yet someone we’re encouraged to like in the end. Every time the play has a bash at satire, it is swamped by a wave of sentiment. In the end, the sugar content is just too high.