'Far Away' review or 'I told you not to side with the crocodiles!' 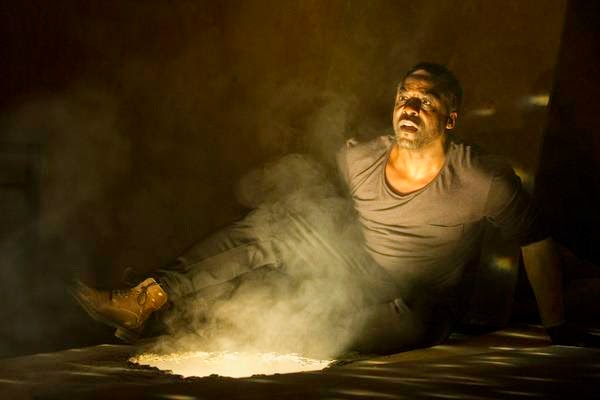 Gosh, what a subtle, unusual and slippery play this is! I have to admit, I was more than a little lost for great chunks of this whisperingly intense 40 minute long production. There’s something of Sarah Kane’s ‘Blasted’, flashes of ‘1984’ and blasts of Athol Fugard’s ‘The Island’ about Caryl Churchill’s play ‘Far Away’, penned in 2000. It is a strange, intense and jolting piece, joined ever so lightly together by themes of war, oppression and fear. I can’t say I completely clicked with JMK Award winner Kate Hewitt’s probing production but I really enjoyed the confusion – the clarity just out of reach – and spent the whole show leaning forward, questions whirring through my head.

This is a quiet production – except for a few startling blasts – and it treads incredibly lightly. The first section is the quietest and is set some time at night. Young Joan cannot sleep and she has a lot of frightened questions to ask her aunt Harper (Tamzin Griffin). What is going on in the shed outside; why is her uncle covered in blood and why is he beating children?

There is only the lightest layer of threat about this opening scene, which gradually intensifies until we become certain that the world outside – whatever it might be – is a very bad and a very bloody place indeed. Georgia Lowe’s set in this early exchange is simple but suggestive: the traverse stage is lined with wooden panels, which also are nailed up against the two exits on each side of the stage. The wood looks like it has been soaked and is swelling from the pressure. It is a mildly oppressive environment and, in its echoes of disaster, chimes nicely with the shadowy threat that clings to this early conversation between a startled child and her cold, firm aunt.

Just as we settle into the vague threat of this first scene, the location and tone slides off in a curious direction. We are now in a hat factory where a grown up Joan (and I really don’t think this production made this continuity clear) is now making hats alongside her colleague Todd (Ariyon Bakare). There is a weird and cool absurdity about this cluster of scenes at the hat factory, as Joan and Harper set about making increasingly elaborate hats. Joan is unhappy about the working conditions and agitating for some sort of rebellion. But other than a steady stream of smoke that wafts up from beneath the stage, these scenes are relatively relaxed.

We settle until this strange sparring - until suddenly there is a black out, shrill noises blast about the space and harsh lights illuminate loudspeakers suspended against the walls. A conveyor belt of elaborate hats rotates around the top of the stage, with loud moans and clanging chains accompanying their slow procession. In some productions, this scene involves a huge number of prisoners – but I like the idea of these ghostly prisoners, hats without bodies, product without person. It is more frightening and, weirdly, probably a little less surreal then the sudden invasion of a massive cast of performers. It is just one of a great number of assured and distinctive directorial touches from Kate Hewitt, who strikes me as a properly independent soul.

That clanging prisoner march is alluded to with just the whisper of a phrase; ‘It’s a shame we had to burn the hats with the bodies.’ (I paraphrase) There is an excruciating casualness about many of the pivotal lines in this play; a sort of cloak and dagger approach to the dangerous impact of the words which forces the audience to sit up and pay absolute attention, which, in lots of ways, feels much more reflective of real life and the indecently incidental way in which the giant stuff – the heavy personal moments or serious political injustices – unfold in real time.

Anyway, so there is just a glance at the horror that might be unfolding beneath those steaming floorboards – and then another shift. The floorboards are lifted to reveal crater-like cracks and great blasts of smoke wafting up from below. We are now in a state of full-blown war and all our characters are injured and exhausted. The language notches up a few levels of absurdity. Todd and Harper discuss the war unfolding ‘out there’ and their speech has been weirdly grafted onto the natural world; ‘It is always right to be against the crocodiles!’ or ‘The cats have gone in on the side of the French!’ Again, I found this section quite tough going and was unsure what to latch onto, or whether to just let go. But then the absurdity builds and builds into eventually even the elements are battling against each other; ‘I didn’t know whose side the river was on...’ All sense flies out the window and Churchill lets the absurdity of this endless state of war wash right over us.