'Pomona' review or 'Have you tried clearing the drainpipe?' 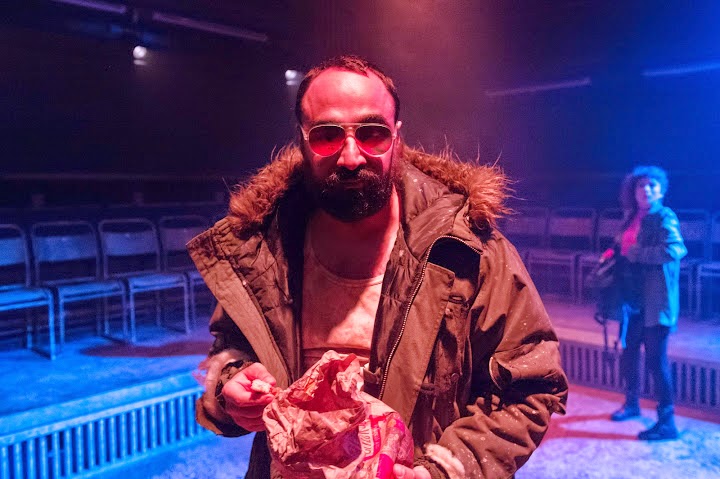 Friday night was special. Anyone in the audience of Alistair McDowall’s new play, ‘Pomona’, will have felt it. This isn’t a perfect play but it is a perfectly alive piece of theatre, hissing and spitting with menace and meaning. So many playwrights just write and they really are very good with words – but McDowall is one of those rare and awesome things. McDowall writes theatre.

The play is set by a ringroad on the outskirts of Manchester, although the exact location matters little. George Lowe’s set resembles a large concrete drainhole, which dips in the middle. This is where all the stinking shit of life gathers, swirls downwards and spirals off to god knows where. This is the end of everything.

It is here that young Ollie (Nadia Clifford) has come in search of her twin sister, who has recently gone missing. In fact, a number of girls have disappeared recently, just vanished without a trace. Rumour has it that ‘Pomona’ - a large abandoned concrete jungle in the middle of the city – is somehow involved. But there are lots of dark rumours swirling about these days and some even say that the Cthulhu, nightmarish looking creatures that look like all your fears combined in one fucked up face, are soon to be awakened and bring forth a new reign of terror. So, you know, not the most care-free or cheering time to be alive.

McDowall is very clever about how he releases his play’s secrets and we learn about this context in a spiralling and surprising manner and from the most vibrant, mad but utterly believable characters. The opening scene sees the leader of the ringroad, Zeppo (Guy Rhys), describe the Raiders of the Lost Ark in vivid but chaotic detail. It feels like we are listening to a comic book explode inside a mental man’s head and it is only at the end of this fizzing monologue that the fairly mundane reality of Zeppo’s speech – the fact he is describing an adventure movie we all know – is revealed.

McDowall uses tricks like this incessantly and ingeniously throughout the whole production. Meaning is held back, humour is used to distract and great colourful characters provide us little nuggets of truth with a whole lot of enjoyable but obfuscating detail. Nothing is ever what it seems.

So the play begins and we settle into what we imagine is a sort of warped adventure play, which initially seems comfortably withdrawn from anything that we might call reality. We chuckle at motor mouth Zeppo, who talks about the responsibility of information whilst he munches on his nightly portion of one hundred chicken nuggets. We see little glimmers of real life but mostly we see McDowall’s comic-inspired imagination at full tilt, colouring in his context and his characters in a glorious range of dark, oozing shades of black.

But that weird reality is allowed to settle for just a moment. The stage fills with snapshots of horror. One girl talks on the phone to an absent emergency service – and begs him or her to burn all her money in the streets. Someone else is begging with another girl to lock the doors. The characters rush into the centre of the stage and back again and we begin to feel this central and evil force, sucking these girls into the middle of the stage and shrouding them in something awful.

The play snaps forward and we see Ollie inside the city and beginning life as a sex-worker. There are a few more twists and turns that we clock that this isn’t Ollie – but the twin sister that Ollie is looking for. The play twists a little more, grabbing at any perceived certainties and turning them into something ambiguous and dark but emotionally true.

The play opens out again and a new dimension – in a play of endless layers of reality – unfolds. We meet Charlie (Sam Swann) and Keaton (Sarah Middleton) and the two begin to play Dungeons and Dragons, plunging us into the ‘reality’ we have already seen unfold. The walls between reality and fantasy  begin to blur. ‘The board is our imagination’ enthuses the gloriously geeky Charlie (Sam Swann is one hell of a comic) and it slowly dawns on us, with dread and excitement, just how much this play is reflecting in on itself. Where does one person’s reality end and another’s fantasy begin?

But wait! There are more levels! The play jumps and jolts about a little more and we realise that Charlie is in fact a security guard for Pomona. Just who is outside the ‘game’ and who is in it? We spark and flare through a few more scenes (Ned Bennett’s direction is exquisitely synchronised with McDowall’s text throughout) and the characters merge and interact in surprising and conflicting ways. One of the security guards – Moe (Sean Rigby) – visits sex worker Fay (Rebecca Humphries) and tells her, in a scene that just about hollers with fear, about his recurring violence issues. In another scene, we discover that Ollie’s sister has taken part in snuff films. Throughout the play, the girl ‘playing’ this game – Keaton – wears the Cthulhu mask and in one of a number of piercing monologues, Ollie’ sister threatens: ‘One day I’ll come back to this city on fire./I’ll have flames pouring from me./And I’ll keep walking through the streets in circles until everyone and everything is just ash.’

Gradually the alternate realities – but also people’s darkest desires and actual behaviour – begin to bleed into each other. One threat or fear from one scene pops up in another scene but, in this new reality, that fear has now been realised in monster-form. Fact and fantasy fuse together until it becomes impossible – and frighteningly pointless – to attempt to separate the two.