'Where the Shot Rabbits Lay' or 'Beans, bonding and Bear Grylls (sort of).' 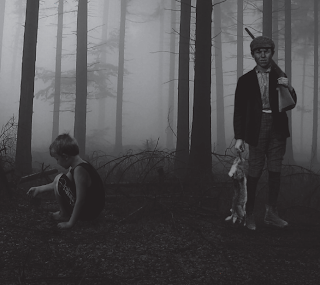 There are some lovely grace notes in Brad Birch’s intimate father-son tale, ‘Where the Shot Rabbits Lay’, but a few duff scenes too.

A rugged dad (Peter Warnock), bearing a vague resemblance to Bear Grylls, is taking his milky soft son (Richard Linnell) on a camping trip. They’re going to eat beans, bond and attempt to salvage their relationship in the wake of a messy divorce. They’re also going to try to shoot rabbits.

Andy Robinson’s abstract set – really just a mash of natural colours – sets the tone for this unassuming production. Director Roland Jaquarello is careful not to over-impose, although his constant use of twanging ‘outback’ music does begin to grate.

Birch’s writing is best at its least self-conscious. There are some small but striking little moments; the lads’ first shared joke or a simple apology from the boy to his dad. It’s the big, messy arguments that misfire. The father’s cruel outbursts feel too venomous for such a gentle hum of a play. One wonders why the poor lad doesn’t just run home to his mum.