'Routes' review or 'Where did the wizard go?' 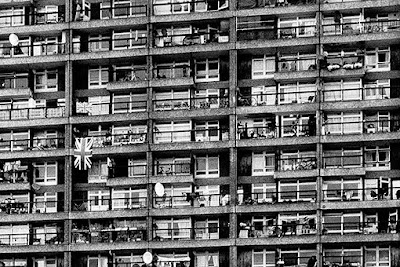 A thin white path zig zags above the stage, around the walls and through to the white benches in the audience. Occasionally, the lines flare up with light, a vague threat on the fringes of normality. It looks a bit like a bleached version of the Yellow Brick Road – only there’s no wizard at the end of the line in Rachel De-lahay’s play immigration play, ‘Routes’.

There’s something a touch forced about this piece, right down to Paul Wills’ attractive but overly translatable set. Simon Godwin's production feels important and the characters, authentic - but the play is a little too calculated and concertinaed for my taste.

There are two distinct stories here, both of which eventually wind up at UK border control. In Nigeria, Femi (Peter Bankole, an actor who exudes such kindness, you’d willingly destroy a play just to give him a happy ending) is trying to secure a dodgy passport in order to make a risky trip to England and his family. In London, young Somalian and orphan Bashir (Fiston Barek) is teaching his friend, Kola (Calvin Demba, soft as nails), about the importance of family. Pity that Bashir’s about to be forced out of the country for good.

Barek’s Bashir and Demna’s Kola have a believable and surprising dynamic together. Their friendship freezes and thaws, freezes and thaws, until it eventually solidifies into something special and lasting. De-lehay captures the fear that underpins the swagger of teenage lads; the hatred of loneliness that so often forces people away. It’s just a shame that, at only an hour long, there’s not more time to work on this friendship. The early development of the boys’ relationship is depicted brilliantly but, as the stakes get higher, the length to which Kola will go for his new friend Bashir doesn’t really chime true.

That goes for most of the relationships in this play; they start out organically and convincingly but are gradually undermined by an overly demanding plot. Once Bashir is thrown into an immigration removal centre, the relationship with his advisor – Anka – accelerates at a great pace. There just isn’t enough time for the audience to jump on board. The same goes for the thorny relationship between Kola and his mum, which is temptingly complex but slightly under-worked.

There is intrigue in every relationship and import in all the plot-threads; they just need a little more time. The whole play also feels frustratingly one sided, the immigrants cast as the good guys and Immigration Control as the faceless evil. But there are some heart-thumping moments here. When Bashir leaves the Immigration centre for good, he and Kola share a fierce, snatched hug. Boundaries can be crossed and homes created in the most unlikely places.