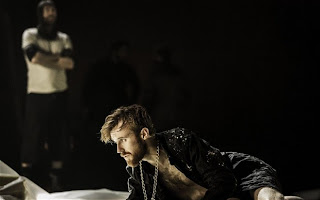 You’ll need a stiff drink in the interval of Joe Hill-Gibbins’ flamboyant version of Marlowe’s ‘Edward II’. This is an onslaught. Kyle Soller (on exuberant form as Gaveston) leaps through the audience, there are some bizarre filmed segments and lots of half-naked writhing and gruesome deaths. You won’t be bored.

Director Hill-Gibbins excites as much as he excruciates. His edgy take on ‘The Changeling’ divided audiences, as did his moody and expressionistic version of ‘The Glass Menagerie’, both at The Young Vic. His productions are visually explosive, frantic and sexy as hell - and this version of ‘Edward II’ is no exception.

This production is always on its toes, nimble and restless. Lizzie Clachlan’s makeshift set, composed largely of balsa wood screens and lavish drapes, stands on the verge of collapse. The costumes are overstated and mismatched; there are horned henchmen, sharply suited servants, period costumes and armoured soldiers.

The Olivier stage is flanked by two huge screens, which are used excessively. As with lots of Hill-Gibbins’ touches, these filmed sections are hit and miss. The projections create an atmosphere of unusual intimacy. As a bewildered Edward II (John Heffernan) is led to his cell, his white face is projected against a black expanse; he is isolated, impotent and lost.

Other filmed scenes are audacious but poorly judged. In one scene, some underlings have a crafty cigarette break outside the National theatre. It has the strange air of a Children in Need sketch and the production starts to feel like one big joke.

Heffernan is a subtle and quirky actor and his talents aren’t put to brilliant use here. His Edward II is spoiled and sexual, though never in a particularly sexy way. Soller is deliciously defiant as Edward’s lover Gaveston and thumpingly cruel as Edward’s executioner, Lightstone.

But it is telling that the actors struggle to shine. They fight and frolic and, particularly in the murder scenes, they really frighten. But the Oliver stage demands more. This production plays around brilliantly with the space and text – but it never truly fills the stage.