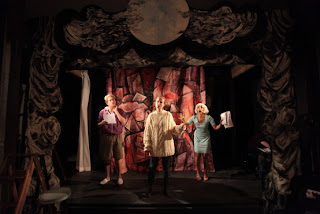 ‘Once upon a time, a couple fell into their child’s imagination’… and the audience went tumbling in after.

Theatre company Dirty Market have a reputation for aesthetic verve and rigour and they don’t disappoint with this deliriously warped fairy tale. The kooky script, devised by the company, occasionally gets too weird for its own good. But the visual side of this show, which takes us on an extraordinary journey through a young boy’s mind, is fearless and compelling.

Bryan Woltjen's superb set makes inspired use of the venue, an abandoned print works in Hoxton. The deeper we go into the protagonist’s imagination, the stranger the space becomes.

The show opens on a narrow stage, where a boy is haunted by clawing silhouettes of groaning witches. We are then led to the edge of a magical wood, which is illustrated using a series of dazzling, Grayson Perry-esque paintings (Susan Sowerby and Simon Weller). In between scenes, the flickering projection of the boy darts about the sparkling painted landscape.

Oscar Gibbs holds the sprawling script together with his clever songs and winking narrative. The characters are very, very strange; like ‘Alice in Wonderland’ extras, only much more frightening. Benedict Hopper terrifies as a squawking witch and Arti Naithani’s twisted Bo Peep is the stuff of nightmares. Sometimes wayward but always intriguing and novel, this show makes even the zaniest companies look dull.