'A Midsummer Night's Dream' or 'Soliloquies by spotlight' 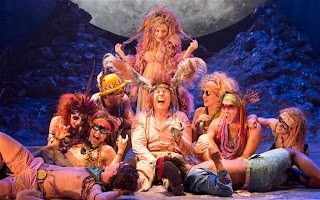 The big question here is, just what do we make of David Walliams' Bottom? Well, it's perfectly nice: perky and attractive and quite funny to look at. It's the rest of Michael Grandage's 'A Midsummer Night's Dream' that feels saggy.

The other big name draw is Sheridan Smith, who recently stunned in Hedda Gabler at The Old Vic.  Smith plays Queen of the Fairies, Titania, here re-imagined as a husky-voiced hippy. With a heavily made up face, rainbow skirt and puffed out hair, Smith’s Titania looks like she’s spent a lifetime at Glastonbury and only just survived to tell the tale.

Smith has a faint whiff of sex and mischief about her, especially when she's pounding about the stage dancing like a lady possessed. She delivers Shakespeare's words with a refreshing lack of ceremony, intelligent but free. Smith could turn out to be a brilliant Shakespearean actress but she’s under-used in this safe production, which unfortunately isn’t straining to say anything new.

Christopher Oram's set is glamorous but a little underwhelming. The fairies' forest, which has prompted some properly whacky interpretations over the years, is depicted as the ghost of a mansion, with crumbling tiles, remnants of an elegant staircase and some verdant lighting.

The back stage-wall is filled with a massive moon, which the actors spend a lot of time posing in front of. The misty, delicate monologues – and there are some exquisite ones in Midsummer – are lucid but lack spontaneity, especially when delivered under a spot light.

The most enchanting moments are not between the fairies but the four lovers, undone by Puck's magic dust. Katherine Kingsley is a fearsomely spirited Helena, slapping, kicking and wailing out her woes. There's a spikiness about her anger that, unlike much of this production, feels modern.

David Walliams plays Bottom as an exceptionally effeminate thesp, cooing and hip-thrusting his way through the show. He's an excellent performer but not a brilliant actor. A polished night all round but no real magic.