'In the Jungle of Cities' review or 'Is anyone else lost?'

In The Jungle of Cities, Bertolt Brecht
Arcola Theatre, Wednesday 18th September
Written for Time Out 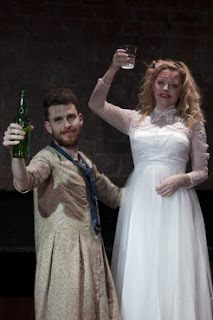 During the 1923 premiere of Bertolt Brecht’s early play, ‘In the Jungle of Cities’, Nazi supporters chucked stink bombs onto the stage. I’m no fascist, but based on this revival I can’t say I blame them. This is a black hole of a play and a wearying test of endurance.   It is set in a ‘mythical metropolis’, namely Chicago. One day, Shlink (Jeffery Kissoon), a wealthy lumber merchant, enters a lending library and offers to buy young Garga’s opinion on a book. Garga (Joseph Arkley), hungry but idealistic, refuses. An epic battle of wills ensues, as the capitalist and idealist fight to the death. Director Peter Sturm’s production is certainly eccentric. Most characters enter the stage on their knees, some dart about like cockroaches and a violent sexual energy lingers. Ladies scrawl lipstick over their faces and men expose a little too much pubic hair. But there’s little shape, sense or authority to this (very) difficult show. Scenes slide by in a blur, adding nothing. There is some sharp acting, particularly from Jurgen Schwarz as a reptilian henchman and Mia Austen as Garga’s brittle, burnt out wife. But Arkley and Kissoon’s central performances lack definition. Brecht’s angry words tumble out in great floods but make little impact.