The Outsider, Albert Camus
The Print Room, 18th September 2018
Written for Time Out 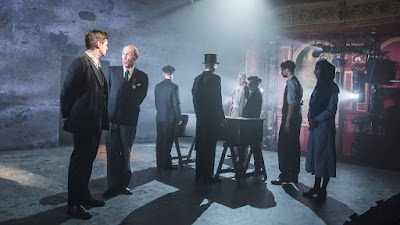 It’s no surprise this is the first major UK stage version of Camus’s existential head spinner: ‘The Outsider’ is a nightmare to adapt. How to transform Camus’s spare and pressing narrative into a dynamic play? How to hold on to all that ambiguity and still create an assured production? Booker prize winner Ben Okri is a champion for giving it a go and has created an unsettling and surprisingly amusing show that lingers long in the mind.
Designer Richard Hudson has replaced Camus’s blazing sun, which beats down ceaselessly on protagonist Mersault throughout the novel, with four rotating ceiling fans. The fans circle above as Mersault first buries his mother and eventually – because of the sun, malice or perhaps no reason whatsoever – winds up killing a man. Mersault is imprisoned and sentenced to death and still those fans continue to spin pointlessly above an airless cement block stage.
It sounds pretty bleak and the book can make for a harrowing read, but director Abbey Wright and writer Okri have bravely decided to create a properly distinct on-stage experience. For starters, Mersault speaks. A lot (in the novel he barely says a word). Camus’s narrative is delivered directly to the audience by a po-faced and quietly engaging Sam Frenchum and, in a weirdly warming experience, we find ourselves instinctively siding with this outsider.
Some of the novel’s icy cruelty has been lost but the comic absurdity of existence rings clear. Every scene change is carried out with manic bluster, as dazed actors scurry blindly about the stage.The talented ensemble cast play their character roles with relish, creating ghoulish and hard-edged caricatures. Amid the dazed laughter are moments that still sting – no more so than when an imprisoned Mersault listens, with pain etched across his face, to the fading music of a passing ice cream van.