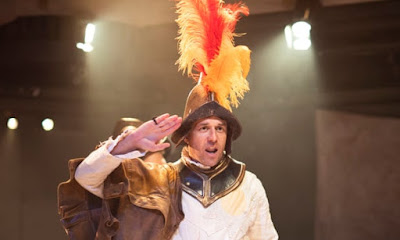 There’s a whiff of Brexit about Losing Venice, which sees a Spanish Duke attempt to restore Spain’s fading influence on the world stage with little thought for the consequences. The play hit a nerve when it premiered at Edinburgh in 1985, and marked out Jo Clifford as an inimitable and inventive writer. But Clifford’s script is a slippery beast, much gentler and stranger than it first appears, and director Paul Miller never quite gets a grip on it here.
The play is set in the Spanish golden age but is shot through with playful contemporary references. Designer Jess Curtis has created a period punk setting: Camden Town relocated to 17th-century Spain. The court poet Quevedo wears a ruffled shirt and skinny jeans and the Duke dons a black leather pelvic pouch, which he thrusts proudly at anyone in his path.
The opening exchanges are sparky and confident, the Duke whining to Quevedo about Spain’s dwindling power and his own drooping penis. Tim Delap’s bullish Duke strides restlessly about the stage, a soldier without a battlefield, while Christopher Logan’s Quevedo breathlessly invents poems that will never be heard. The two play off each other with gusto, each as absurd and lost as the other.
But in the second act, as Clifford unleashes her theatrical imagination, Miller’s production falters. The Duke and his gang set sail for Venice, where they encounter fate-controlling sirens, cloaked conspirators and bizarre existential revelations. The company seems unsure whether to rein things in or just enjoy the ride. The humour fades and the energy drops. Losing Venice, which started with such verve and promise, is lost to the audience.