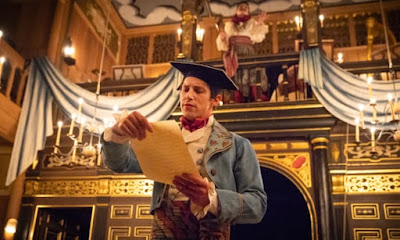 When does a desire to be funny start to feel a bit fussy? Director Nick Bagnall has carefully mined Shakespeare’s early comedy Love’s Labour’s Lost for laughs. There are bawdy love scenes, physical gags aplenty and expansive performances from a chamber cast of eight. Some of the embellishments work well but it’s also a little, well, laboured.
Katie Sykes’s costume design is period dress with a fairytale flourish: soft hues, velvety suits, shiny crowns. The show starts with the Princess of France sat beside a toy music box and also features hobby horses and heart-shaped balloons. When the King of Navarre and his pals swear off women for three years, and decide to devote themselves to study, they look like school children messing around during lunch break.
The childish element wins some easy laughs and reminds us that this is a play about young love hardening into something mature and lasting. There’s a delicate chemistry between Paul Stocker’s soft-hearted Navarre and Kirsty Woodward’s ballsy yet vulnerable Princess of France. But these gentler moments are rare and too much time is devoted to showboating.
Jos Vantyler looks like he’s stumbled off a Spanish soap opera as the flouncing knight Armado, driven mad by love. He certainly wins over the audience, as he leaps about the stage and professes his feelings in a hammy Spanish accent. Vantyler also plays Armado’s page and spends a lot of time talking and singing to his shadow. It’s a show-stealing turn but can feel strained. The same applies to many of the broad comic scenes, which work too hard to make Shakespeare feel fun.
It’s the ad-libs and cheeky interactive moments that are genuinely amusing – particularly when a lord stumbles out from his hiding place behind a woman in the audience and shouts out triumphantly: “I have been closely shrouded in this bush!” But it’s when the Princess’s father dies and the fun fades that Shakespeare’s language finally catches. Underpinned by Laura Moody and James Fortune’s haunting lullaby, the actors stop labouring at love and start living it.