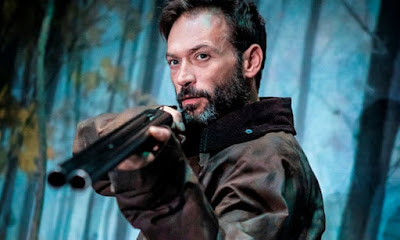 Foxfinder starts in silence. A farmer and his wife sit at a table, stiff limbed and eyes trained ahead. Their farm is on the brink and the much-feared foxfinder is coming to check for an infestation. If foxes are discovered, the farm will be shut down. The silence stretches on and the atmosphere darkens. Or does it? Director Rachel O’Riordan’s West End transfer of Foxfinder strenuously highlights the tension of Dawn King’s dystopian vision, but fails to summon it. King’s play has the potential to haunt and frighten, and O’Riordan has worked directorial wonders in the past, but they elude her here.


The 2011 debut of the piece launched the playwright’s career and confirmed Blanche McIntyre as a director of exceptional dramatic instinct. McIntyre’s production was pared back and simple, with the audience crammed around the tiny stage of the Finborough in west London.
This production, however, feels a little lost and overexposed in its expansive and shiny new home. Designer Gary McCann has gone for an expressionistic farmland look: a gloomy rural landscape in a nameless time. Looming painted tree trunks line the back of the stage and, at the front, a real tree bursts through the kitchen floor. Its trunk will soon be joined by others, as the farm and those damn foxes begin to make their shadowy presences more strongly felt. As the foxhunt intensifies, a forest-filled screen drops down in front of the stage, trapping the characters in ever-dwindling spaces. It is meant to induce claustrophobia but, with so little tension generated on stage, winds up looking like a bit of a botch-up.
Though the staging is a tad clunky, it is the headline-grabbing casting that has most neutralised King’s play. The TV actors packed into this tight four-hander don’t quite fit. Iwan Rheon plays the titular foxfinder, a near-mythical creature who has been trained by a shadowy institute since the age of five. Rheon is a master of glittering malice – a look he honed to perfection in Game of Thrones. But there is more to this role than menace. In a jarring mismatch, the foxfinder is meant to be 18, young and impressionable; Rheon is 33.
Paul Nicholls and Heida Reed (of EastEnders and Poldark, respectively) play Samuel and Judith Covey, a husband and wife grieving for both their farm and their dead son. The actors look a little over-directed, but Nicholls does burning rage pretty well as his sorrow for his son transmutes into anger. Everyone except farmer Samuel begins to doubt the existence of the foxes, which start to seem like a handy excuse for the government to control citizens and deflect from its own shortcomings. But Samuel, desperate for someone to blame, hunts down his grief with a gun.
The only actor who looks truly comfortable in her role is Bryony Hannah as the kindly but anxious neighbour Sarah. She seems casual, but her eyes tell a different story as they dart around the stage, alert not to the danger of the fox – but of those who hunt them down.