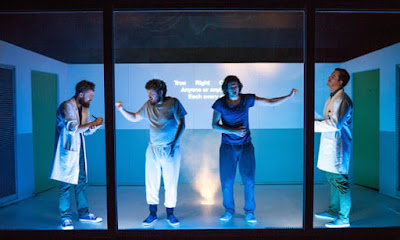 Sarah Kane’s gruelling last play feels doubly painful in this new interpretation from Deafinitely Theatre. Performed for the first time in British Sign Language and spoken English, 4.48 Psychosis – written shortly before Kane’s death – becomes more than an extended suicide note or an examination of depression.
Instead, the play is opened out and turns into a heartfelt examination of what it feels like to live with a profound disability, and just how isolating that can be.
Paula Garfield’s powerful production takes place entirely behind a see-through screen. Paul Burgess has transformed the stage into a nightmarish laboratory, augmented by Joe Hornsby’s violent lighting and Chris Bartholomew’s searing compositions. Two speaking actors, Jim Fish and Matt Kyle, play the often-hostile doctors while two deaf actors, Adam Bassett and Brian Duffy, play a patient (or perhaps multiple patients) suffering from severe depression. Kane’s words are spoken, signed, mimed, interpreted through dance and projected against the back wall. Every effort has been made to listen carefully to what Kane is trying to say.
The patient’s struggle to communicate with his doctors and the audience says as much about life lived with a disability as it does about depression. Lines such as “body and soul can never be married” or “this is not a world in which I wish to live” ring with dual purpose. The use of BSL also makes Kane’s imaginings feel disturbingly tangible. The image of a mind whose “floor shifts as ten thousand cockroaches” is much more difficult to shake off when it is acted out: Bassett mimics the cockroaches with his fingers, staring helplessly as they slowly advance across his body.