'Eyam' review or 'For the greater good?' 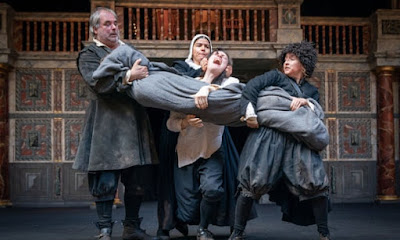 One hour into Matt Hartley’s new play, the bubonic plague still hasn’t arrived. The signs are very much there: Hannah Clark’s set is drowned in darkness, and human-sized ravens stalk the stage. But still no Black Death. That’s a shame because with it lies the natural drama bound up within this sprawling play based on a true story.
In 1665, the plague infiltrated a small Derbyshire village via a tailor’s cloth brought back from London. The citizens faced a deeply dramatic dilemma: should they flee and save themselves or keep quarantine and prevent the Black Death spreading? Corralled by the local reverend, the villagers decided to stay. Three quarters of them died.
The bare facts ripple with dramatic potential but the play struggles to settle on a story. Rev William Mompesson (a suitably starchy Sam Crane) and his virtuous wife Katherine (Priyanga Burford) arrive in Eyam and fail to make friends with the sweary locals. Tension bubbles up between William and local greedy landowner Sheldon (Adrian Bower). But before their story can get going, the once-exiled Rev Stanley turns up. In a distracting move, Stanley is played by a woman. Annette Badland performs the role with exacting gravitas but this isolated bit of gender-blind casting doesn’t feel like it serves a purpose.
Countless other stories are thrown into the mix: of gay lovers, doomed sweethearts and black-toothed butchers. There’s an awful lot of sound and fury in Adele Thomas’s production but it signifies little. When the plague finally hits, William calls on his villagers to make the ultimate sacrifice. Somewhat unbelievably, they all but instantly agree. The villagers join in song, but Orlando Gough’s swirling harmonies signal a feeling of community that Hartley’s play never quite locates.
In the show’s dying moments, Crane solemnly recites the names of the 273 villagers who lost their lives to the plague. Suddenly and unexpectedly, the sheer magnitude of their sacrifice echoes down the ages.