'Pilgrims' review or 'How's your pulse?' 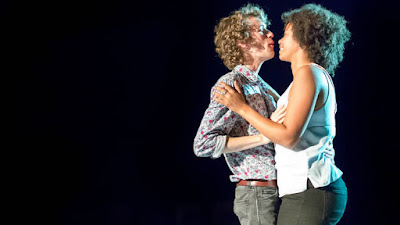 A tiled mosaic lies atop a raised platform. There are gaps in it; holes through which the actors can fall. Above the stage hangs jagged lattice work – a broken horizon perhaps, or the unfinished edges of a story? ‘Pilgrims’ is a play rich in metaphor. It is about two male mountaineers and the one girl – Rachel – stuck in the middle. But ‘Pilgrims’ is also about men and adventure, and how men might lose sight of themselves. It’s about love, and how we all lose sight of ourselves through that. And it’s about narrative and control, and just whose story is this anyway?
This is a seriously smart new play from Elinor Cook – a restless piece of writing that keeps chipping away at itself, leaving sharp and glittering edges exposed. ‘Pilgrims’ begins at the end, with old friends Will (Steffan Donnelly – brilliant and dangerous) and Dan (Jack Monaghan) stranded at the top of a mountain. They seem like the best of friends. They seem like heroes.  And then Cook weaves and darts backwards – back to the beginning and to Rachel (Amanda Wilkin) – and cracks emerge. The story of these two men, once as solid as packed snow, melts and flows away from us.
Tamara Harvey directs with a feather-light touch. When Dan has a panic attack – frightened at the safe life he now lives – Will’s shadow looms large. A gasp of breath occasionally blasts out of the speakers; frightening and foreboding, and then gone. The wall between the scenes is wafer thin – broken with a stolen glance, a giggle from an actor, a nod from the wings.
But there are moments when this forensic play seems a little too self-conscious and controlled.  Rachel just happens to be a PhD student – majoring in folk songs, war and women – and spends a lot of time telling hyper-relevant myths. The metaphors and myths begin to crowd out the characters and, for all its impressive ambition, this mountaineering adventure ultimately feels a little cold.