'Paradise of the Assassins' review or 'Can you make it a quick death?' 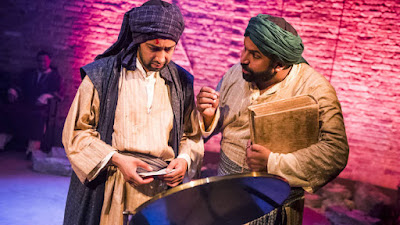 This inaugural production at the elegantly refurbished Tara Theatre is caught at a cross-road. ‘Paradise of the Assassins’ begins – quite literally – at a fork in the road, when lovers Zamarrud and Hussain lose their way en route to Mecca and wife-to-be, Zamarrud, is kidnapped by the Assassins, an extremist Muslim sect. Anthony Clark’s laborious adaptation of Abdul Halim Sharar’s century-old Persian love story is – unfortunately – equally lost. Part-religious treatise, part-bawdy comedy, part-stinging satire and even part-musical, this muddled show forks off in far too many directions.
This is a play largely about how love, both human and religious, can drive one to commit unspeakable sins - but there is precious little love in evidence here. Zamarrud (Skye Hallam – strong and still) and Husssain (Asif Khan) have a brittle opening scene together – and then barely share a glance for the rest of the play. It’s a flimsy relationship on which to hang a heavy play.
Hussain’s religious radicalisation feels shakier still. After Zamarrud is kidnapped by the sect, Hussain promptly renounces his Sunni upbringing and joins the Shia Assassins. There is one weird, shimmering scene between Hussain and an Assassin Sheikh (Naveed Khan), who tells Hussain that behind every overt act is a ‘covert reason’, which only the leaders will understand. But then the interval comes and – following the break – Hussain is radicalised. All the knotty and interesting stuff happens off-stage, which makes the increasingly extreme on-stage actions tough to stomach.
Clark's juddery direction – with light comic scenes one moment and deadly earnest ones the next – does little to settle the audience. Danyal Dhondy’s songs are sweetly melodious but over-simplify things. Matilde Marangoni’s set is one of the few elements that achieves a striking sort of ambiguity. A silver metallic moon and bronze sun rotate, on a pulley system, throughout the play.  Sometimes blood red and at other times oozing orange, the sun and moon bathe the world below in a light that radiates both danger and hope.