'Dinner at The Twits' review or 'I'm not sure I can stomach this.' 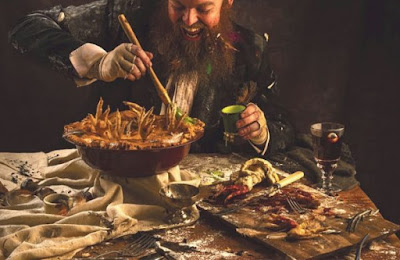 The lust for novel theatrical – or filmic or dining or adventure or any-bloomin-thing – experiences has reached a fairly bonkers level in London. It arguably started with PunchDrunk’s promenade shows and the huge excitement they generated from letting their audience, masked and giddy, roam about the set. That thirst for novel immersive experiences was further stoked byYouMeBumBumTrain, which – again – allowed the spectator to take on a starring role (Christ we’re a narcissistic bunch, aren’t we?). Then there was Secret Cinema and, most recently, Crystal Maze and a whole slew of theatrical ‘adventures’ – all of which merge theatre and some sort of ‘extra’ component and charge very high prices for those keen to be thrust in the middle of these odd, and sometimes awesome, theatrical collisions.
Now we have the merging of the theatrical and dining experience (a genre that has been gaining traction for a while, but which I have never really *got*) withDinner at The Twits, which invites the audience to share canapes and a suitably gruesome dinner – full of bubbling sauces and dodgy pies – with Roald Dahl’s hairy, horrible Twits. It’s quite well done, I guess. But it feels commercially-driven and a tad soul-less to me. This is a solid package deal that has been polished to a shiny and marketable finish by director Emma Earle and her team – but it isn’t brilliant food and it certainly isn’t brilliant theatre. What you’re buying into here is yet another ‘novel’ London experience, which you can post on Facebook and brag to your friends about. But Alice’s Underground Adventure(the last and brilliant immersive show from Les Enfants Terribles) this is not.
This is – also – not a show to experience on your own. Press night at the Vaults was packed with a bunch of seriously awkward looking critics (myself included), with not nearly enough theatre to hide behind. We begin in a loft-like bar, part of a huge set designed with a grand and enjoyably chaotic sweep by Samuel Wyer. We buy cocktails with the currency of ‘worms’ (in reality just quite a lot of money). The cocktails have Twitesque titles – Sting and Tonic etc – but they’re effectively just quite expensive cocktails. Next up is canapes in the Twits’ ghastly garden. So far the Twits are yet to make an appearance. Again, the canapes have funny names – Mouldy Delight and Writhing Spaghetti – but they’re really just a bunch of fairly nice canapes displayed with flair and served by waiters, who (and I don’t quite get this) are dressed like melting clowns. It’s all very hot, very squidged and ever so slightly dull. Curiosity is not rewarded well in this space; a poke around a shed reveals a garlicky dip disguised as paint, and a bunch of snacks hang off a giant tree – but that is about it. Shows like this need more surprises – otherwise the audience stops hunting.
Things pick up when The Twits finally burst into the garden in all their hideous and hairy splendour. Lizzy Dive is a hirsute joy to behold. Her red hair is so huge and spikey it looks like she might lift-off at any moment, her clothes are so grubby you’re scared to get close and her face so weird and warty – her eyes glassy and intense – that she’s genuinely a little bit frightening. Christopher-Robert Barlow is enjoyably grim as Mr Twit, too, though he doesn’t have the same crackle of danger as Dive’s prowling and cackling Mrs Twit.
The scant story line is this: Mr and Mrs Twit are renewing their wedding vows and we are here to join the festivities. Dinner is served in a banquet hall, where we are entertained by the Twits’ pet monkeys and scowled and screamed at by The Twits. The food itself is pretty odd, which is perfectly fine in theory – but it isn’t all that tasty. Everything has a Twit-like twist – so the potatoes have been sprinkled with ‘soil’ (which tastes of WEIRDNESS), the pie has a fowl’s leg poking out of it and the wine – well, probably best not to talk about the wine.
The odd garnishes, the (rightfully) aggressive performances – and the many references to puking and crapping – don’t exactly work up an appetite. It’s hard to care about the food, which strikes me as a tad unfortunate. There are – thankfully – a few brilliant theatrical fireballs in the closing stages, including a particularly gory explosion and the appearance of an enormous puppet bird. The huge bird (part of a storyline which isn’t really worth mentioning) is crazy and beautiful and the whole dining room suddenly tingles as this giant rainbow bird sweeps around the hall, poking at our plates. It all starts to feel a bit magical and a lot more enjoyable: perhaps Dining with Dinosaurs might’ve been a better call?