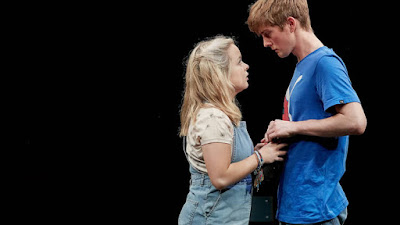 Jess and Joe make a modest entrance in this gorgeous new play, named after them. The two friends shuffle on stage with downcast eyes and smile hesitantly at the audience, as music crackles from a cassette player. Jess and Joe aren’t used to being centre stage. They live in Norfolk and when we first meet them they’re just nine years old. What a delight, then, that playwright Zoe Cooper has chosen to write a play about these two quirky souls, who we watch fall in love – and fall for in return.
This co-production between the Orange Tree and Farnham Maltings is very wise, very funny – and feels utterly authentic. When we first meet Jess (Nicola Coughlan – sparkling), she is in Norfolk for a summer break – before jetting off to her ‘real holiday’ in Italy.  Joe (Rhys Isaac-Jones – still and touching) is a farming lad, born and bred in Norfolk. But a turn in fortunes for Jess and Joe bring the two closer together, as adulthood – with all its complications – seeps into their story.
Jess and Joe’s secrets gradually rise up around the edges of Derek Bond’s fine production. The two actors (consistently mesmerising) speak directly to the audience – but gaps and tears begin to appear in their story. Scenes are replayed, details are corrected, and roles are switched. The actors also control the set (designed by James Perkins), which is made up of a coloured rug and a pile of earth - and a lighting state that changes only with a click from Jess or Joe.
As life gets messier still, Cooper’s characters start to take control – despite the tutting judgement exacted by villagers and friends. Jess and Joe rise above tough breaks and cruel twists of fate until one powerful message rings out loud and clear: character is the only thing that matters.