'No Man's Land' review or 'How many skins can you shed?' 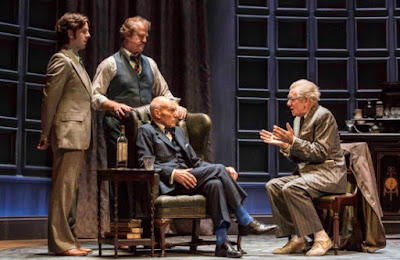 I have come to a local park – bathed in sunlight and buzzing with life – to write this review. I have come to this park for two reasons. Firstly, No Man’s Land is a truly unsettling affair, with a lingering after-shock that – here in this park – I am attempting to protect myself from. Secondly, this Harold Pinter play (written in 1974) returns, again and again, to the image of an old man peering through leaves and branches to spy on other – bigger and brighter – lives in the distance. So I find myself in this park, both to escape Pinter’s oozing, icy and funny play, and to embrace it.
Sean Mathias and his designer, Stephen Brimson Lewis, have also fixated on this image of rustling leaves; a very large living room, with walls that reach up too high and furniture that feels too big and too sparse, is capped by a ‘ceiling’ – a projected image of trees shivering in the wind. This landscape changes colour with the passing of time and has a weird, fake sheen to it. The room feels like a hazy memory of a house once lived in; a theme that flickers up repeatedly throughout this strange, teasing and jolting work that is about growing old, peaking at life and death through the tree tops, and the firmness and fluidity of writing, memory, and identity.
This spooky living room is home to a rich man of letters, Hirst (Patrick Stewart), who seems darkly distracted (forever peering into a far off place) for the whole of the play. Hirst is dressed in a crisp blue suit and polo shirt, ready to nip off to a fancy club at any moment. He is joined by Spooner (Ian McKellen), a disheveled chap in a crinkled suit with a coat slung over his shoulder, always on the verge of leaving. Hirst and Spooner have met this very afternoon. Supposedly. Perhaps. But as Pinter’s play trips and darts forward (directed with a lovely looseness by Mathias, who isn’t afraid to let the unknowns linger), the nature of Hirst and Spooner’s relationship shifts and simmers. Are these two old men in fact chums from Oxford? Are they, perhaps, taking Briggs (Owen Teale) and Foster (Damien Molony) – two vaguely threatening henchmen who seem to have a vested interest in Hirst – for a ride? Are they trapped in some sort of purgatory – or perhaps two versions of the same person, or even Pinter himself?
None of these questions are answered – as they absolutely shouldn’t be – but it’s awfully weird and fun and stimulating to be teased, prodded and surprised. Sometimes it feels like No Man’s Land is one great dark joke on the audience, as Spooner and Hirst convince us utterly of one scenario – and then take us screeching in the opposite direction. At other times it feels like Pinter is urging us to look back on our own lives – on those women or memories shimmering in the shadows – before it is too late and we find ourselves peering through the branches. In other scenes, No Man’s Land feels like a devastating muse on the purpose of theatre and writing, which Pinter sometimes seems to consider his salvation, at other times his downfall (Spooner alternately saves and undoes himself with his incredible command of the English language).
The four strong-cast juggle these slippery scenes with such skill. Stewart mesmerises as Hirst, with a cold dark stare that seems to understand something awful, and true, that we would be lucky to never fully grasp. Owen Teale’s Briggs – with a wispy moustache and battered leather jacket – is brittle and bruising one minute, and hilarious and harmless the next. But it is Ian McKellen (whose Pinter experience until now was limited to a sketch in 1962) who truly stuns. His ability to transform almost instantly, with just a whispered threat or near-imperceptible shift in tone, is uncanny. Throughout the play McKellen is – absolutely – a tramp who has stumbled off the street, a panto dame, a poet and a painter with great wisdom at his fingertips, an utter cad or a sensitive soul with a faded elegance in every delicate sweep of the wrist.
McKellen’s face softens or hardens – his expression opens out or closes – and, suddenly, he is someone else. Lips pursed and eyes flickering, McKellen’s Spooner instantly glows with pomposity and a barely hidden distaste for the characters around him. Arms spread open and lips set in a watery grin, Spooner is a desperate conman embracing his prey. Sat at the table with a fancy breakfast buffet, McKellen’s Spooner is – and when and how did this happen? – a civilized but condemned gentleman, preparing for death. And just when we think we might have Spooner nailed, McKellen does a totally unexpected and brilliant little skip whilst tying up his shoelaces. Which other character or truth does that skip reveal? Is Spooner on the verge of death, or set to burst into life? Or is he trapped somewhere in between, doomed or perhaps lucky enough to repeat himself, night after night on stage?