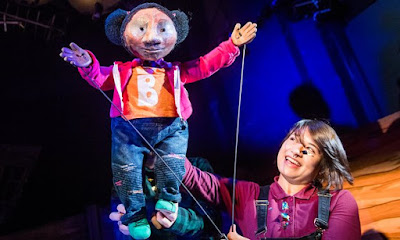 Emily Rising is a play about growing up and growing away. It’s a meditative show about the connections we form in life and just how fleeting and potentially limiting those relationships might be. It is funny and beautiful and sad and hopeful and, at the end, my nine-year-old theatre-friend Qeiva clapped with so much force that I started to worry for those little hands.
Oliver Hyman’s production of Dan Rebellato’s play (for audiences aged seven and upwards) is visually dazzling, but this is also a very honest piece about how strange and surprising life can be for an older child such as Emily, who is learning to stand on her own two feet. The play is set in a flat in Islington, north London, where 10-year-old Emily lives with her mother, Sarah, and little brother, Robbie. Emily’s parents are getting a divorce and, one morning, Emily wakes up and discovers that her feet no longer touch the ground. She soars higher and higher, until she can barely make contact with her family, her school or her friends below
Children’s shows can often be quite vague, but Rebellato’s play (co-produced byLittle Angel and Goblin) is poetic and precise. The characters are played by puppets – but the actors’ hands, arms or legs are incorporated into the design so that there’s always a bit of the puppeteers (David Emmings, Yana Penrose and Peyvand Sadeghian), poking around the edges. Emily wears jeans and a hoodie and is a big Beyoncé fan. At one point, If I Were a Boy plays and Qeiva whispers: “I know this!” This is Qeiva’s world on stage.
All the puppets, other than Emily, have a surreal and subjective twist. Emily’s mum has a wooden face, huge, jangling earrings and a dress that tapers down to nothing. She is all head, just as Emily might see her from above while floating. The puppets’ bodies reflect the environment in which they live – such a clever touch from designer Alison Alexander. Emily’s teacher has black binders for hair and a yellow-pencil scarf. The doctor has two stethoscopes for eyes (yet cannot see what is wrong with Emily), and the nosey neighbour’s head is made of fussy flowers. The social worker is constructed from piles of paperwork, with a clipboard for a face.
Rachel Champion’s set shows us the world through Emily’s eyes and includes a warped fence that stretches out towards us and a spindly house. Emily is initially attached to the house by string but – eventually – floats off. Emily drifts away from her family and, the further she drifts, the “more beautiful” the world becomes. It is such a mature and complex ending – but Qeiva knows exactly what it means: “She’s gone off into the universe.”