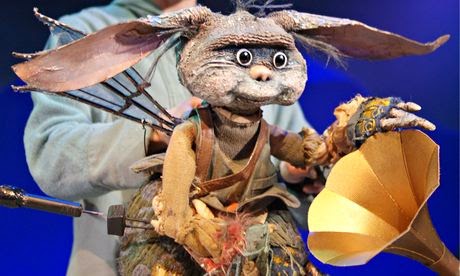 "When are the naughty children going to be quiet?" My goddaughter, Blue, is worried about the noise levels in the Little Angel theatre. But a few squawking kids are the least of my concerns. This is the first time I've spent more than five minutes in charge of a small child (specifically 3.5 years small) – and I have chosen to spend that time watching a puppetopera show loosely based on The Tempest. This could go very badly indeed.

The lights go down and, much to Blue's tutting concern, the other kids are still nattering and gently bashing each other. She seems much more interested in her shiny new trainers than the shimmering blue-tinged world (designed by Laura McEwen) on stage. This is a very sweet but very tough crowd for the small company of three – two opera singers and one puppeteer.
Things do not start well. The singers (Sani Muliaumaseali'i and Natalie Raybould) soar through their introduction and Blue, who has never heard opera, covers her ears. Although Martin Ward's music is friendlier and softer than most operatic compositions, it is still a lot for a kid to take in and I sense some of the children struggling to keep up. Eyes glaze over and little legs – anxious to be playing outside in the sunshine – swing restlessly.
But then a storm kicks off and the hero of the story, a pretty little doll, is swept out to sea. Lights flash, the music trembles and the young audience falls silent. A little hand creeps over to clutch my knee and holds on tight until the storm is over. Blue might not be able to understand everything that is going on, but she is feeling it all with amazing intensity.
Once the storm has passed the doll is washed up on an island, where she meets a scrappy creature called Skitterbang (controlled with great empathy by Lowri James). It is in these quieter moments that the show dazzles. There's a beautiful scene when Skitterbang, whose shack is decked with dangling metal scraps, plays with the metal and makes it sing. Coloured lights softly flare up, the music tinkles and the girl, Skitterbang – and their gobsmacked audience – are drawn closer together.
Skitterbang is not a pretty puppet. He has huge ears and a scrap-heap body and could have been scary were it not for Sue Dacre's sensitive puppet design. His floppy ears rise and fall with fear or excitement and his massive wiggling brows map his emotions. He is kind and easy to understand and the kids love him. When he flies through the audience the children, who I thought might be frightened, reach out to touch his scruffy wings.
There is a gentleness to Peter Glanville's production that allows the children, who are so receptive to every flicker of emotion, to trust the actors and the characters they play. The show begins to feel like a playgroup with puppets rather than a frightening or challenging experience. When Skitterbang and the girl find their happy ending, a crystal ball spins above us and sends little bubbles of light pulsing around the audience. My happy companion – who has forgotten she misses her mum and dad – reaches out and tries to touch the flickering light.