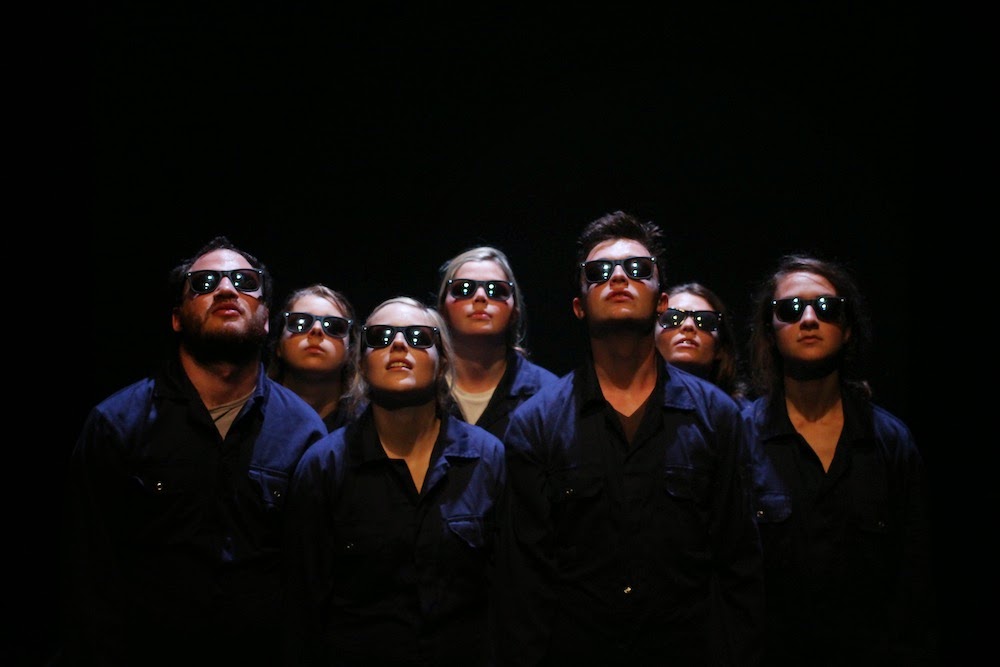 In October 2010, 1 billion people watched on screens around the globe as 33 Chilean miners were finally rescued after 10 weeks underground. The Wardrobe Ensemble’s ‘33’ is an attempt to re-tell or at least re-imagine their story. Using a combination of forceful choreography and inventive projections, the company jumps between the clawing conditions underground and the media frenzy above. It’s not quite as intense as one would’ve hoped but this is still a very clever and relentlessly inventive production.

There’s a willingness to experiment here – for the company to stretch themselves, their story and their medium – which is hugely encouraging. You can feel The Wardrobe Ensemble and their director Tom Brennan pushing at the boundaries of their show, teasing it and pulling it out of shape. Not every experiment comes off but there’s a natural curiosity about this company that suggests they will develop quickly and significantly over the next few years.

There’s some particularly nifty work with cameras and projections. In fact, this observation applies to both the shows I watched at Younger Theatre’s Incoming Festival and suggests - perhaps - that emerging companies have an instinctive grasp of technology that older companies often lack. There’s an ease about the use of screens that hints at a new generation who have grown up with smart phones and iPads and for whom screens are a normal part of everyday life.

The cameras are used to create live recordings of the miners’ faces, which are projected onto a black screen that hangs centre stage. Their white-chalk faces look like ghosts, hovering in the dark. The persistent camera work reminds us of the obsessive TV coverage of the Chilean miners’ crisis and the way in which the ‘show’ above ground began to overshadow the murkier reality unfolding underneath.

The screen is used to map out the progress of the three separate drills used to reach the trapped miners, as well as the layout of the miners' new 'home' underground. There is a particularly powerful sequence when one of the miners – Edison – jogs frantically around the stage, as a tiny torch light tracks his futile progress on the map behind him (nice work from video designer Adam Hodgson). The frenzy of the miner's movements and the pathetic progress of the tiny torch highlight the horrifically squeezed and unnatural environment the miners were forced to endure.

There are a few fantasy scenes involving a singing Elvis that don't quite come off. They’re actually not quite weird enough and feel oddly tethered to the show, fracturing an otherwise tight framework. These delirious fantasies should have fed into the claustrophobia of life underground but they take us away from the space and puncture the tension.

I’m also not completely sold on the extended monologues. The abstract choreography is excellent, the projections are convincing and the sheer dynamism of the actors is bloody impressive – but the words feel a little bit sloppy. There are a few ‘sideways’ conversations that work very well. At one point, one of the miners goes a bit dotty when he realises he cannot remember the colour of his fridge. These little details  sharpen up the dialogue - but a lot of the monologues lack detail and are, instead, pumped full of watery sentiment. It’s a shame as they threaten to wash out what is otherwise a very thoughtful and effective show.