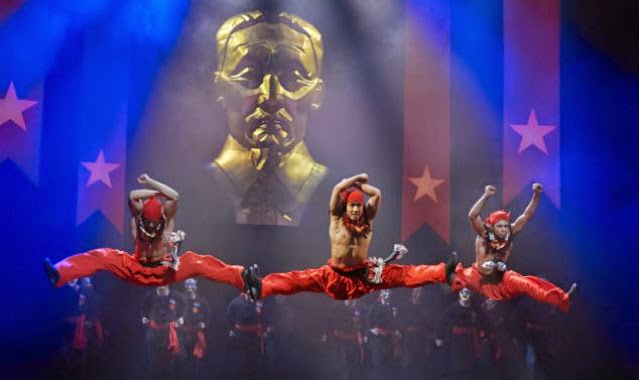 The helicopter has been streamlined, there’s a little more swearing and possibly some twerking but Miss Saigon is essentially the same beast that took the West End by storm 25 years ago. The dancing is still dazzling, Claude-Michel Schönberg’s score is as passionate as ever and the singing, particularly from Eva Noblezada’s Kim, is outstanding. Producer Cameron Mackintosh, the West End Hit Machine, has another blockbuster on his hands.
When Miss Saigon opened in the West End in the late 80s, memories of the Vietnamese War were strong. These memories have faded slightly but the story of deeply compromised and drawn out clashes between the East and West is horribly familiar. Miss Saigon is a thwarted love story between a Vietnamese woman and an American marine but it is also an intense and politically motivated piece, which examines the devastating impact of war on those left behind.
Director Laurence Connor has scaled down the show so it feels less operatic and a tad more real. Totie Driver and Matt Kinley’s set is vibrantly persuasive but often sparse, affording real space to the actors and their voices. The performances are on a human level rather than at a booming Broadway pitch. Eva Noblezada is stunning as the reluctant Vietnamese prostitute Kim. She has a beautifully rich mezzo voice and there’s barely a scene in which she doesn’t sing. It’s an extraordinary feat – especially when you consider Noblezada is only 18 years old and this is her West End debut.
When Noblezada sings ‘Movie in My Mind’, the spot-lit faces of Vietnamese prostitutes hover in the air and the stage is flooded with a spooky, bitter sweet optimism. Noblezada’s Kim is a hopeless romantic but she is fierce and brave too. Alain Boublil’s book does not shy away from the bloody reality of war (Boublil and Schonberg were behind the equally gruelling Les Miserables) and, early in their courtship, Kim spits out to Chris: “My parents were bodies whose faces were gone.”
Noblezada and Alistair Brammer, playing Chris, spend an awful lot of time singing and snogging together. They’re a convincing couple and their voices blend easily together. Jon Jon Briones wriggles and winks his way through the role of the seedy Engineer, determined to flee Vietnam and make it to America. His big number, ‘The American Dream’ is a smart and wry song, which sees the Engineer melodically mock the ‘big boobed, big bummed, big bank balance’ American way of life.
Despite some gritty moments this is still a Mackintosh creation, which means it is big and bold and bloody slick. The fall of Saigon is portrayed with military precision, as a massive cast marches about the stage, creating a tidal wave of mesmerising patterns. A car drives on stage and endless spotlights perform a dance of their own. Some of the spectacle feels indulgent but, as the helicopter tumbles out of view, we are reminded of the great big black space that’s left behind when the soldiers leave.